At the August Chattooga County Board of Education meeting Board Member, Brad Hayes’ made a recommendation to move forward with accepting bids to prepare the land for construction of new tennis courts at Chattooga High School. 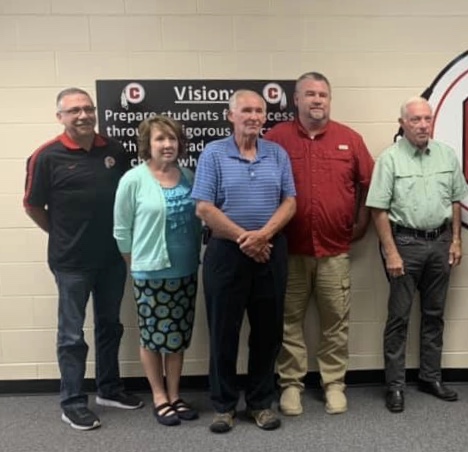 During their August meeting, Chattooga County Board of Education Board Member, Brad Hayes’ made a recommendation to move forward with accepting bids to prepare the land for construction of new tennis courts at Chattooga High School.

“I had decided earlier this month that I was going to place on our August Work Session Agenda a discussion about moving forward on the tennis court project. After looking at the site, and talking with Mr. Hosmer, Dr. Mobbs, and Mr. Worsham, I was convinced the site needs to be cleared because of concerns of safety and security.  I did not want to go into great detail at the board meeting, but the bottom line is the safety and well being of our students comes first. Whether they are inside the school building, outside the building, or participating in athletic and/or other school related activities, they’re safety must be our number one priority. My recommendation was to move forward after a discussion, and begin accepting bids on clearing the site. I believe our tennis players deserve beautiful courts to practice and play tennis, and especially courts to call their own. It has been great that the Summerville Rec and City of Summerville have allowed us to use their tennis courts, but it’s time to add tennis courts to our already beautiful school and campus. The proposed site is right beside the school, wrestling facility, and parking lot. I would recommend the money come from the 1.6 million that we have in a fund that originally held 2 million. The money should be used for “needed projects.” The parking lot at Summerville Middle School and Superintendent’s Office was paved, awnings at the back of the high school were installed, and AC units were installed at Summerville Middle School using money from this account. The 2 million, now 1.6 million, was not set up for academic needs, but for ‘needed projects’. I feel the clearing of the land and building of new tennis courts is a ‘needed project'”, Hayes told AllOnGeorgia.

Board Member Julia Houston told the board regarding the tennis courts, “I think with our budget crisis we have concerns, we don’t have a balanced  budget. This is not an academic need and our school system has academic needs, I would like to see us focus more on academic needs at this point than tennis courts.”

Board Member Sam Ballard said, “It is a good project…. the timing of it seems rushed for us because we have been under so much pressure.”

Board Member Eddie Elsberry said he wanted to see the board move forward with the tennis courts.  “I would like to see us move forward, I think it is a project we need to do, the high school campus is maybe the nicest campus in Northwest Georgia. This was started by the previous board the money is set aside, that same money is still set aside… We need to do it now or it may never get done.”

Chairman Agnew said he too had concerns with the deficit and added, “our attention needs to be towards academics.”

“I think balancing our budget is our first concern and putting our focus on academics,” Houston responded.

The funds allocated for general construction and upgrades cannot be used on academic measures and Superintendent Hosmer clarified for the board, “…this money can only be used for projects, like tennis courts.”

Superintendent Hosmer then read the official allocation for the money in the fund set aside by the previous board for the tennis courts and other projects, explaining that this money could only be used for “the board’s commitment in connection with future projects… it could be tennis courts, ball fields, locker room or auditorium. If we don’t spend it, it will just stay where it is.”

Hosmer also added that the project money could not be used to balance the budget.

The motion to approve Hayes’ recommendation of accepting bids to clear the land for the tennis courts was made by Mr. Elsberry with a second by Mr. Hayes. The vote
was 2-3, with Mr. Elsberry and Mr. Hayes voting “yes” and Mr. Ballard, Mr. Agnew and
Dr. Houston voting “no.” The motion did not pass.

“I was disappointed that the board chose not to get bids to start the clearing and grade work for the tennis courts,” said Elsberry. “Mr. Hayes did a great job with his presentation of his study of the location, safety and how we can move forward with a project that has already been set in motion by the previous board and superintendent. Hopefully, the board will look deeper into the project and see that it is a doable project that will only make our system stronger.”

Elsberry pointed out that sports has a direct correlation to actually improving academic performance by referencing a study by the Atlanta-based Center for Disease Control. “The CDC has a study that shows, students involved in sports, band and other physical activities actually perform better in the classroom and improves the overall health of the student. From that CDC report: ‘The evidence suggests that superintendents, principals, and athletic directors can develop or continue school-based sports programs without concern that these activities have a detrimental impact on students’ academic performance. School administrators and teachers also can encourage after-school organizations, clubs, student groups, and parent groups to incorporate physical activities into their programs and events…’ And ‘When children and adolescents participate in at least 60 minutes of physical activity every day, multiple health benefits accrue. Regular physical activity builds healthy bones and muscles, improves muscular strength and endurance, reduces the risk for developing chronic disease risk factors, improves self-esteem, and reduces stress and anxiety. Beyond these known health effects, physical activity may also have beneficial influences on academic performance,’” Elsberry told AllOnGeorgia.