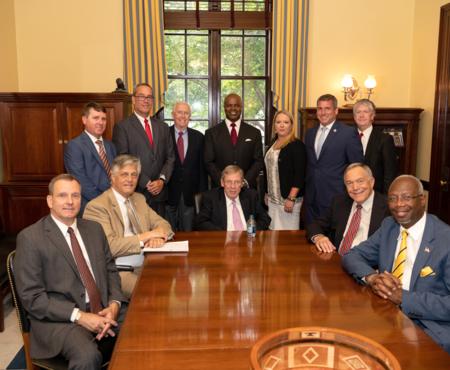 Currently, the Senate is debating the National Defense Authorization Act for Fiscal Year 2020, S.1790, which will strengthen national security and benefit Georgia’s military installations, including the nearly 90,000 soldiers, sailors, Marines and airmen in the state, among other important defense priorities.

“I always appreciate hearing from the Coastal Georgia Military Affairs Council as they travel to D.C. to advocate for the defense community in Southeast Georgia,” said Isakson.“The Senate is currently debating its annual defense measure that makes investments in our U.S. military and will benefit both Fort Stewart and Hunter Army Airfield. I look forward to passing this legislation to support our warfighters and their families, invest in the warfare of the future and fortify Georgia’s strategic and active role in our national defense.”