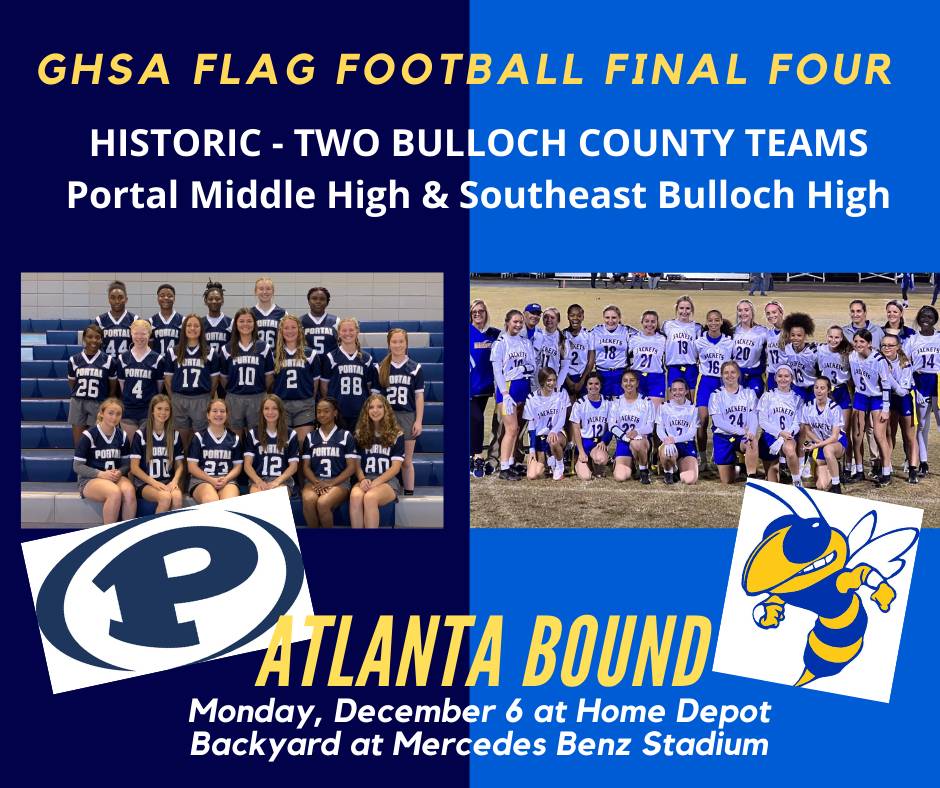 Monday afternoon: Southeast Bulloch High’s game vs. Calvary Day School, which was to have started at 2 p.m., has been rescheduled, and it will now take place at Calvary in Savannah tomorrow night at 6 p.m.

2:45 p.m.: Field conditions were not good at the Home Depot Backyard in order to resume play. The Portal game is being moved to the Atlanta United Practice Facility 20 minutes from Mercedes Benz Stadium. We hope the game can be completed there.

1:32 p.m.: The Portal vs. St. Anne-Pacelli game has been under a weather delay for more than an hour due to inclement weather in Atlanta. When play was stopped, the score was tied 0-0 with eight minutes left in the first half. The delay will also affect the start of the Southeast Bulloch vs. Calvary Day game which was to have started at 2 p.m. Stay tuned.

The teams will play in their respective semi-final games on the Home Depot Backyard at Mercedes Benz Stadium in Atlanta on Monday, December 6.

Portal, in its second year of play, is returning to the state playoffs after making it to the state championship game last year in their inaugural season and finishing as state runner-ups.

Southeast Bulloch High School is in their inaugural season this year and are undefeated with a record of 16 wins and no losses.

These coaches and athletes are making history. Portal will play St. Anne-Pacelli Catholic School of Columbus, and Southeast Bulloch will play Calvary Day School of Savannah on Monday, December 6, on the Home Depot Backyard at Mercedes Benz Stadium in Atlanta. The winner of each game will then play in the state championship game on December 9.