Selected from 50 school-level essay participants, 20 of the 25 finalists delivered their speeches from the stage of the former Willow Hill School. 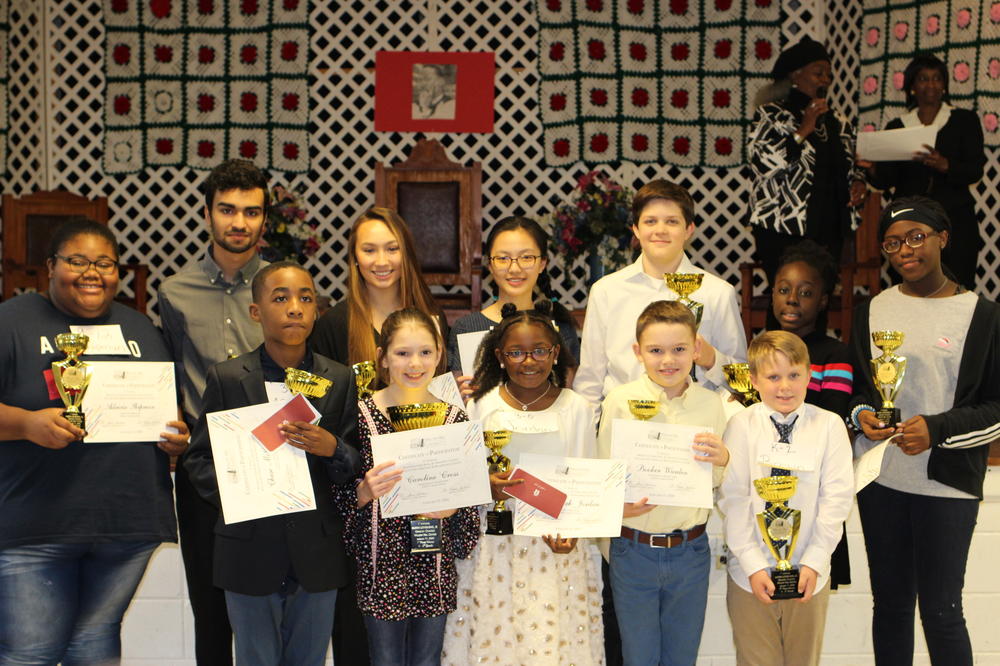 America is known as a melting pot of nationalities, cultures, and ethnicities, and the inaugural Martin Luther King, Jr. Oratorical Contest was certainly a reflection of that metaphor as a diverse group of student finalists gathered on Saturday, January 11, at the Willow Hill Heritage & Renaissance Center (Center) to give an oratory expression of their essay topic, “What does liberty and justice for all mean?” during the competitive public speaking portion of the contest.  Selected from 50 school-level essay participants, 20 of the 25 finalists delivered their speeches from the stage of the former Willow Hill School.  The Center awarded trophies and $700 in prize money to the top-three participants in each of the four grade-level divisions and certificates to all participants.

The finalists articulated facts about the principals of liberty and justice and how they are woven into the history of our nation’s wars, our Constitution, the rhetoric of our social movements, laws, and the Pledge of Allegiance.  They voiced profound personal opinions and painted vivid mental images of the lack of these principals in practice. It was clear from many of their speeches that they each also viewed Martin Luther King, Jr., as not only a champion of civil rights for black Americans, but for all Americans.

“Liberty and Justice for all has been promised in our Pledge (of Allegiance), but America must work to fulfill this promise,” said Maliya Badger, a fifth-grade student from Mill Creek Elementary School, who won First-Place in the Grades 3-5 Division.  Badger, who’s mother is from Jamaica said, “America has come a long way, but we have a long way to go.”

Erin Shen, a 13-year-old, seventh-grade, Chinese-American from William James Middle School, expressed her displeasure about the apathetic way in which the Pledge is recited.  “I observe the absurd phenomenon of my voice drowned in an ocean of monotonous voices. When the last words (liberty and justice for all) are spoken, I can tell my peers are relieved to sit, while I am relieved to not hear the apathy repeated. I have noticed some not even facing the Flag, some merely mouthing the words, and some do not seem to understand the significance of their fortunate protection of liberty and justice.”

Shen, who was born in Statesboro, is the daughter of Dr. & Mrs. Junan Shen, who came to America in 2003, from China.  She won First-Place in the Grades 6-8 Division.

“Equality is the foundation of society, and without it society crumbles to the ground,” said Nathaniel Wright, a seventh-grade American student from Langston Chapel Middle School. “Martin Luther King, Jr. and others led persecuted people toward their goal of equal treatment, and it is up to us to continue what they started. Justice is not given to all and liberty is not given to all,” Wright won Second-Place in the Grades 6-8 Division.

“Liberty and justice are moral American values that have not always been morally and justly implemented,” said Eletria Biswas, a senior at Statesboro High School. Biswas, who is Bengali, was born in Canada, and came to the United States 15 years ago with her mother, Juthika Golder and father, who were both born in Bangladesh. “We must take action to secure liberty and justice.”

Hannah Clay, a Japanese-American, who is a junior at Southeast Bulloch High School, won Second-Place in high school division. “Liberty and justice for all are words that have become routine for students from Pre-K to senior year,” Clay described of the daily school morning Pledge ritual.  “For many of us, we say the words without any thought to their collective meaning.  These words are not an assertion of our rights, but a pledge, a solemn promise of duty. As U.S. citizens, let us not merely demand liberty and justice for ourselves. Let us make it our responsibility to give liberty and justice to all people. We cannot rest in the illusion of reaching a vision that we have not.  It is selfish of us to want liberty and justice. Let us pledge to give it to others.”

“It’s six simple words (with liberty and justice for all) whose meaning is impossible to completely comprehend, and a meaning often disregarded in modern American politics,” said 18-year-old Austin Halaby, a senior at Statesboro High School, who won First-Place in the Grades 9-12 Division.  Halaby, who is Hispanic-Caribbean-Haitian  has been affected by what he now sees in America.

“I’m one of the lucky ones,” Halaby said. “My family was born in Texas before Texas even became a U.S. State.” Halaby and his parents were born in the United States. His mother’s ancestors were Spanish conquistadors who helped to settle present day southern Texas and northern Mexico. His father’s family is Caribbean, Haitian. They fled Haiti to New York City during the country’s dictatorial rule.

“Like the Hispanic families I mentioned in my speech my grandfather’s family left everything behind in hopes for a better life in the States.” In his speech Halaby said, “ We don’t wake up and hear I.C.E. (U.S. Immigration and Customs Enforcement) at the door, but seven families in Bulloch County, some of whom I know closely, have. How can America claim to believe in liberty and justice for all when her actions prove hypocrisy?  It took a hundred years after the end of slavery for someone to preach liberty and justice for Black citizens; however must we wait an additional hundred years for someone to preach total equality for Hispanics as well?”

Dr. Alvin Jackson, Chairman of the Board of Trustees for the Willow Hill Center was impressed by the speeches. “We’re in a former school for people who could not read or write themselves, but who understood the power of words.  As I listened to speeches of these K-12 students, it made me proud of the Bulloch County School System.”

The Georgia Legislature passed a law in 1829, which made it a crime to teach a slave to read or write.  As a result, oratorical skills developed as a primary means of communication. After slavery and during the establishment of the rural Black schools in Bulloch County, orations and recitations continued to be very important.

To honor that heritage and continue to build the public speaking skills of local youth, the Center’s Development Director, Dr. Gayle Jackson, and a five-person committee created the oratorical contest as part of the Center’s educational series, “A Commemoration of 400 years of African-American History”.  Ressie Fuller and Dr. Enola Mosley led the committee which also included Renta Newbill-Jallow, Earl Donaldson, and Chris Johnson. They coordinated with Bulloch County Schools’ Superintendent of Schools Charles Wilson, Dr. Alissa Sasser, and English language arts faculty to encourage student participation, judge school-level entries, provide an oratory workshop for finalists, and host the main competitive event.  Special thanks to Paulette Chavers, Dr. Michael Whitaker, and Eddie Frazier for leading an oratory workshop for the finalists on January 4, in preparation for the competition.

Twelve winners were selected from the 25 finalists with First-, Second- and Third-Place honors awarded in each division. First-place winners also received $100, Second-place $50, and Third-Place $25 All other finalists received a certificate and a $5 gift card. The event was sponsored by The Johnson Firm, P.C., and Sheila Stewart-Leach provided a catered lunch for participants and guests while judges tallied the results prior to the awards ceremony.

The Willow Hill Heritage and Renaissance Center operates as a museum and community resource to preserve the history of the Willow Hill School, the individual histories of the school and its founders, and to promote understanding of the school’s historical, social, and educational impact.