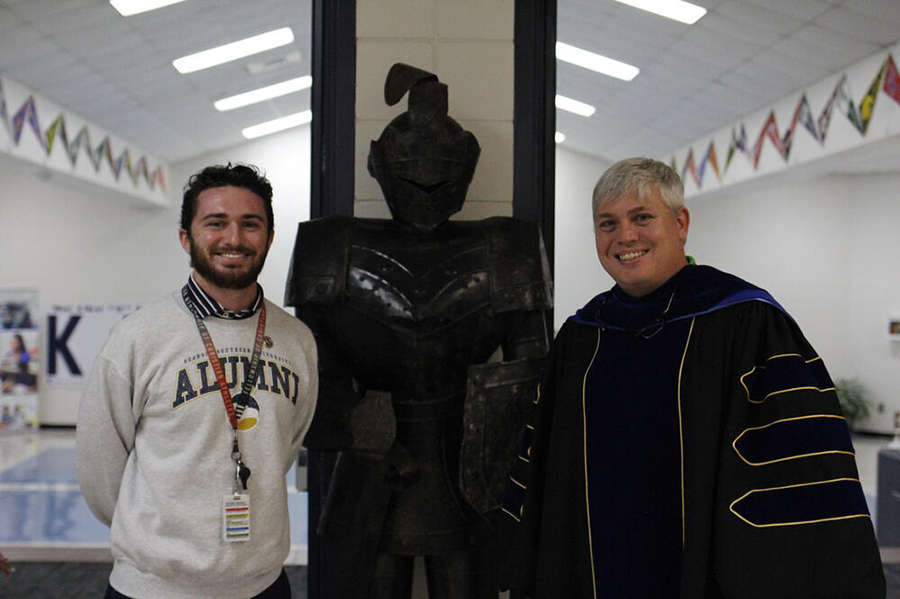 A Bulloch County middle school surprised its newest teacher with a private graduation ceremony on Tuesday morning after he chose to remain with his students instead of walking in his college commencement.

Wearing his Georgia Southern University Alumni sweatshirt, Zachary Barrow, a middle grades education major, walked into the William James Middle School Cafeteria to the sound of enthusiastic cheers. The entire sixth-grade faculty, staff and students, plus his principal, Dr. Scott Chapman, who was donned in graduation regalia, had secretly gathered to honor and congratulate him.

“Thank you to each and every one of you,” Barrow said. “I fell in love with William James Middle School. I know this is where I want to be. I am so very glad to be a William James Knight.”

From a podium on the cafeteria’s stage, Dr. Chapman shared with the audience that Barrow had first joined his staff last spring as a college student. He was completing his pre-professional requirements to become a certified teacher by taking a Practicum II course prior to student teaching. The course places education majors at schools with a certified teacher. Barrow was assigned to Tom Borck, a seventh-grade math teacher at the middle school. One day Borck had to temporarily be out of the classroom, and Barrow led the class instruction while Chapman came in to observe.

“I was extremely impressed that he had not even started student teaching,” Chapman said.  “I along with several staff members immediately knew this was the type of teacher we needed at William James Middle School.”

However, Barrow had not yet completed his student teaching or graduated. Working in collaboration with Georgia Southern and Bulloch County Schools’ Central Office administrators, Chapman ensured Barrow would have the professional learning support he needed at the school level to be successful as a new teacher and complete his university coursework.  He hired Barrow as a sixth-grade social studies teacher with a provisional teaching certificate for fall semester, and the university credited his service over the past 18 weeks to his student teaching requirement.

Barrow’s Social Studies Department Chairperson Jennifer Prosser is a certified instructional coach, and he is also receiving support from the district’s instructional coaches who mentor new teachers. His sixth-grade faculty team have embraced him as well, and were eager to organize Tuesday’s event.

“We have five core tenets at William James,” Chapman said. “First, our teachers build relationships with our students; Our teachers expect academic excellence; Our teachers teach behavior; Our teachers help shoulder the burden; and We hire and retain rock stars. Mr Barrow exhibits the first four, and it is my job to ensure the last.”

It was evident from Tuesday’s ceremony that Barrow is already building strong student relationships as students greeted him with high fives, fist bumps, and hugs.

“He’s an administrator in the making,” Chapman said.

When asked why he was willing to give up his college graduation, Barrow explained, “I know this is unconventional, but I believe I’ve been classroom ready for 10 years even if my age didn’t show it. I completed the Teaching as a Profession Pathway in high school, and I knew what an IEP (Instructional Education Plan) was before I knew my ABCs. I participated in my pinning ceremony on campus yesterday, but I realized this is my life now. It’s not at Georgia Southern. It’s here at William James.”

Barrow, who now understands his parents’ passion for education, also did not want to ask them to leave their students in Mount Vernon. His parents did plan to join their son and now fellow educator after school today to celebrate.