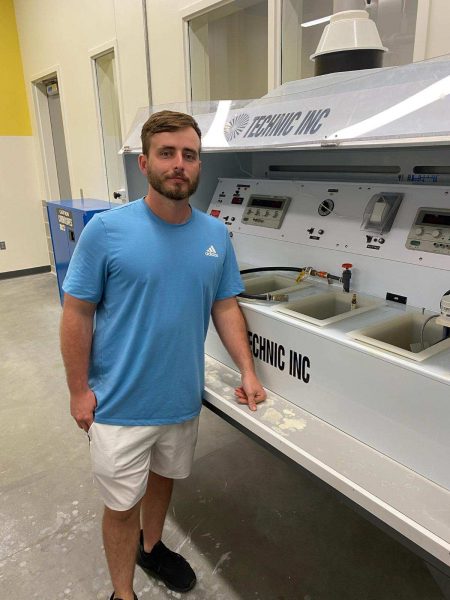 Matthew Johns is a first-generation college graduate who almost didn’t attend college. It was the encouragement from his grandfather that drove him to pursue a manufacturing engineering degree from Georgia Southern University.

Johns, who comes from a rural town in southeast Georgia, was one of around 80 graduates from his high school, where he mainly focused on sports.

“I played baseball, basketball and football,” Johns said. “We won two state championships in baseball and I never really thought about my life outside of sports. Going into sports was my original hope and dream.”

Johns’ relationship with his grandfather, who suffered lifelong hardships as a professional tradesman, was a motivating force when it came to his decision to think beyond athletics and attend college.

“Growing up with my pops is what led me to pursue engineering,” Johns said. “My grandpa lived next door and he was a millwright. We worked on cars together, and that was where I caught the bug for mechanical work. He would always say ‘If you’re going to do something, you need to be an engineer.’”

Johns felt that his education at a small school program put him at a disadvantage initially.

“I came from a big education gap,” Johns said. “It was a little overwhelming to me when I first got here. Most of the guys in my class came from STEM programs. My school was so small we didn’t have anything like that.”

It was the support of his professors and classmates that helped him through the challenges.

“It took me a few times of failing to figure it out,” Johns said. “I started talking to my peers and I think at some point it just clicked for me. You either fail and get better, or you fail and get worse, so I developed study habits by looking at my peers who came from STEM programs.”

Because of the positive impact his mentors had on his college success, Johns spent much of his time sharing his own experiences with younger students.

“I have become somewhat of an advisor for a lot of people,” Johns said. “I tell them about my experience, what worked for me and what set me back, so that they can be better for themselves.”

Johns felt that his time at Georgia Southern allowed him to expand not only academically, but socially as well. Through his experiences on campus he has become more open to a variety of individuals and ideas.

“It’s a melting pot of people,” Johns said. “I feel like I used to be very small-minded, but learning how to interact with people in my program helped me. I understand that people come from different cultures and have different political beliefs. I like to try to talk to people about it and understand their situation and their way of doing things.”

Johns graduated on May 12, and he is now preparing for a move to Connecticut in July where he will begin a new role as an operations supervisor at General Dynamics Electric Boat where he’ll train and eventually lead a team.

“With my background, I feel like I can relate to people more and be more accepting,” he said. “I know not everybody has the same personality and not everyone is motivated in the same ways.”