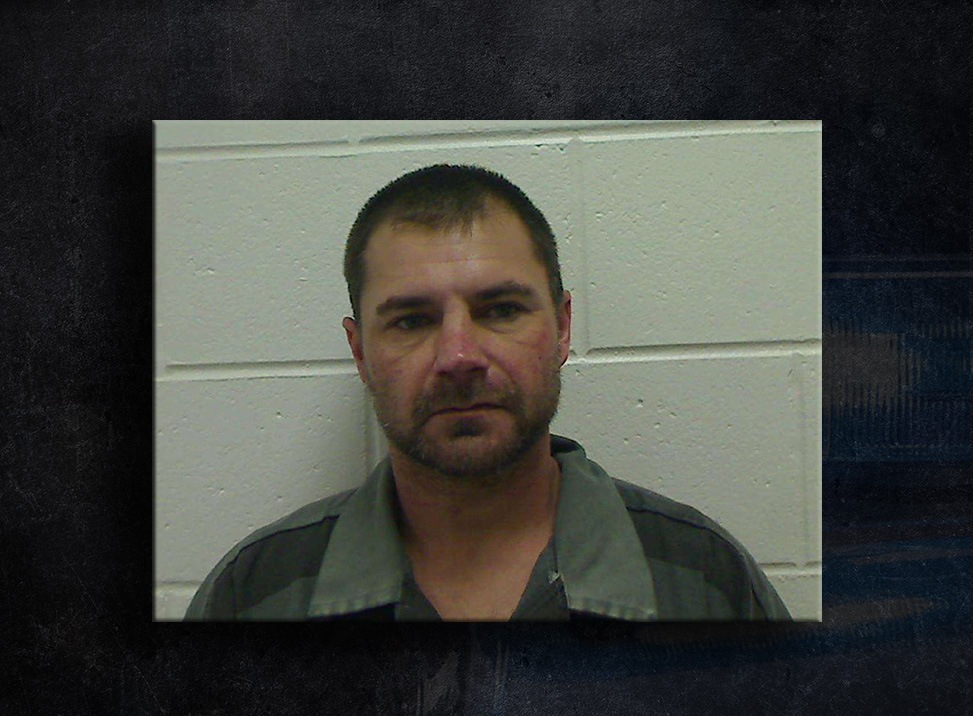 A man from Kite, Georgia was arrested in Statesboro Thursday after burglarizing Harbor Freight and damaging a surveillance camera at the nearby Goodwill.

On Wednesday night, a man with a vehicle and attached trailer were seen on video from Harbor Freight after Statesboro Police Department officers responded to the business’s alarm being activated. The following morning, officers responded to Goodwill after employees discovered a damaged surveillance camera and a suspicious vehicle and trailer parked near the building. Detectives confirmed that the vehicle/trailer were the same from the Harbor Freight incident. The truck was found to be registered to Kyle Matthew Edenfield and was searched pursuant to a search warrant. The same day, Edenfield was reported to be loitering in the area around Goodwill. He was arrested and charged with 1 count of Burglary-2nd Degree, 2 counts of Criminal Damage to Property-2nd Degree, 1 count of Possession of Marijuana (misdemeanor), and 1 count of Possession of a Drug Related Object. He has an extensive criminal history, including burglary, and remains in the Bulloch County Jail pending further judicial action. 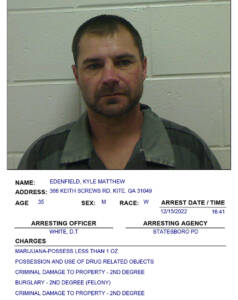 On 12/14/22 at 10:37 p.m. SPD Patrol officers responded to Harbor Freight on Highway 80 E in Statesboro for an alarm activation. Officers discovered forced entry to the building and upon reviewing the surveillance system observed a truck with trailer pull up outside of the store after it closes. A white male exits the truck and is later seen on video inside of the store. Nothing was stolen as the burglar fled upon tripping the alarm. Officers searched the area but could not locate the burglar or his vehicle.

On 12/15/22 at 8:33 a.m. officers were summoned to Goodwill on Highway 80 E approximately one half mile away from Harbor Freight. Employees there had come to work to find their loading dock camera damaged and an unfamiliar truck and trailer parked near that area of the building. There had been previous attempts at theft from the same area of the Goodwill building. Detectives investigating the Harbor Freight burglary were able to confirm that the truck and trailer at Goodwill were the same as those used on the previous night. The truck was registered to Kyle Matthew Edenfield (35, Kite, Ga) and was searched pursuant to a search warrant issued by detectives.

Later on the 15th , officers were summoned back to Goodwill for a suspicious white male loitering in the area. Patrol officers made contact with the male, Edenfield, and confirmed with detectives that he was a person of interest in the prior incidents. He was taken into custody and charged upon further investigation with 1 count of Burglary-2 nd Degree, 2 counts of Criminal Damage to Property-2 nd Degree, 1 count of Possession of Marijuana (misdemeanor), and 1 count of Possession of a Drug Related Object. Edenfield has an extensive criminal history to include Burglary and remains at the Bulloch County Jail pending further judicial action.

Anyone with information on either of these cases should contact Det. Donald White at 912-764- 9911 or submit an anonymous tip to tips@statesboroga.gov.