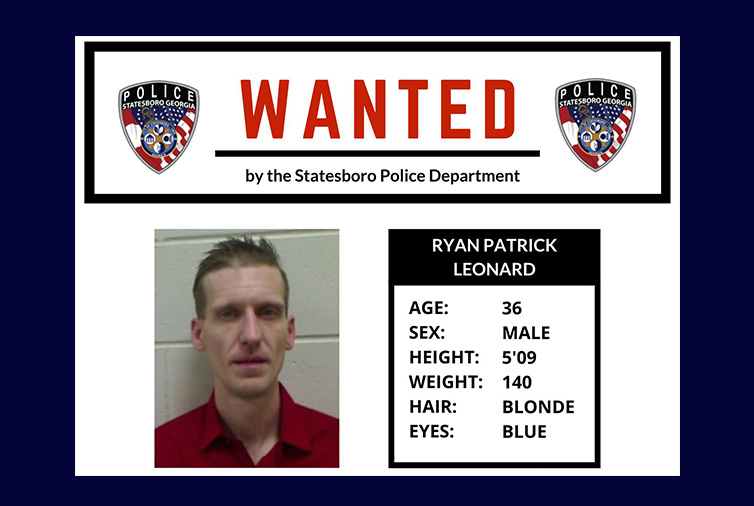 On 8/4/22, SPD received information from a citizen in Claxton, Ga regarding a wanted person, Ryan Patrick Leonard (36, Highway 280, Claxton). Leonard had a variety of felony warrants stemming from incidents in Statesboro over the past two months and was also wanted by agencies in Effingham and Liberty Counties. Officers and deputies with the Claxton Police Department and Evans County Sheriff’s Office were able to locate and arrest Leonard after a foot pursuit. He was then transported back to Statesboro for interviews and booking into the Bulloch County Jail.

Leonard has been linked by detectives to the following offenses in Statesboro:

1. 6/16/22-6/18/22: Leonard shoplifted items from Wal-Mart on two occasions and
then fled from the Patrol officers who confronted him, driving recklessly through
the crowded parking lot and later abandoning his vehicle. He is charged in this
case with 1 count Theft by Shoplifting-Felony, 1 count Fleeing and Attempting to
Elude-Felony, 1 count Obstruction (misdemeanor), and 1 count Criminal
Trespass (misdemeanor). APO Brooks issued the listed warrants.

2. 7/23/22: Leonard stole a riding lawn mower at night from McKeithen’s Hardware
on Independence Way. He is charged with 1 count Theft by Taking-Felony in
this case. Senior Detective Jodie Tanner investigated the case and issued the
warrant.

3. 7/26/22: Leonard returned to McKeithen’s Hardware at night with the intent to
steal other items but was spotted on surveillance cameras by the owner. Officers
responded and Leonard fled on foot. His vehicle and a trailer stolen from Rincon
was recovered at the scene. He is charged with 1 count Criminal Attempt to
Commit a Felony Theft, 1 count Theft by Receiving Stolen Property-Felony, 1
count Loitering and Prowling (misdemeanor), 1 count Criminal Trespass
(misdemeanor), and 1 count Obstruction (misdemeanor). Senior Detective Jodie
Tanner investigated this case and issued the warrants.

4. 7/27/22: Leonard entered the premises of Statesboro Golf Carts on Bernard
Lane at night and removed two golf carts and several batteries. One golf cart
was later recovered by officers hidden in an adjacent wooded area. He is
charged with 1 count of Theft by Taking-Felony in this case. Detective Katie
Reese investigated this case and issued the warrants.

Leonard remains at the Bulloch County Jail pending further judicial action. Information on any of the above listed cases should be referred to the named officers or sent via tips@statesboroga.gov. 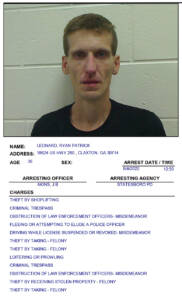 According to SPD, he seems to have an interest in businesses that have property located outside. Be on the lookout for Leonard around those types of businesses.

Anyone with information on his location is asked to contact Senior Detective Tanner at 912-764-9911 or submit an anonymous tip to tips@statesboroga.gov. 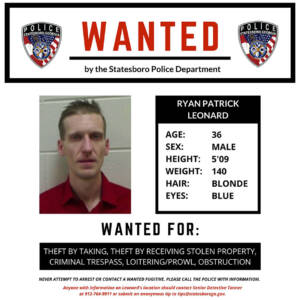