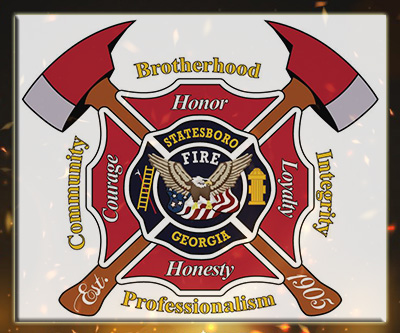 The Statesboro Fire Department has responded to several fires in the City of Statesboro recently. Below is an update from the department after investigations determined the cause of each fire.

STATESBORO, Ga – The Statesboro Fire Department (SFD) has responded to a number of building fires in the community recently. While this is not unusual, recent public attention and interest have caused some to speculate that outside factors may be influencing the amount and types of calls for service.

Fire Chief Timothy Grams states, “The Statesboro Fire Department attempts to determine the cause and origin of every building fire, and at this time, there is no indication that the most recent fires at Little Lotts Creek, Lanier Drive, South Walnut Street or Joyce Street are related.” Grams continued, “Cause and origin investigations have been concluded for all of these fires, and we have no evidence or reason to suspect malicious intent.”

Little Lotts Creek Fire- On March 29th at approximately 9:10 a.m., SFD responded to a working structure fire at Little Lotts Creek Apartments. Upon arrival of the first units, there was heavy fire and smoke coming from the 3rd floor as well as the attic of building C. Units on-scene were able to extinguish the fire with heavy damage to the 3rd floor apartments, attic, and water and smoke damage throughout. Statesboro Fire Investigators in coordination with the State Fire Marshal determined the fire started on the 3rd floor balcony due to “improper disposal of smoking materials.”

Lanier Drive Fire- On April 5th at approximately 4:05 a.m., SFD responded to a possible structure fire at Eagle Court Condos on Lanier Drive. Upon arrival, units observed light smoke and quickly determined that the fire was contained to a clothes dryer in a bathroom. The fire was quickly extinguished and there was little damage to the structure. The cause of the fire was determined to be faulty electrical equipment (dryer) with no contributing factors from the residents.

South Walnut Street Fire- On April 5th at approximately 10:35 p.m., SFD responded to a working structure fire at 232 South Walnut Street. Upon arrival, units observed a vacant multi-story duplex with heavy involvement throughout the structure. The fire was extinguished with heavy fire damage to the structure. A cause and origin investigator was notified and determined that the structure had been boarded up and vacant for a period of time. Investigators determined the cause of the fire to be most likely due to improper cooking and/or heating by vagrants.

Joyce Street Fire- On April 7th, at approximately 8:05 a.m., SFD responded to a structure fire in a mobile home on Joyce Street. Upon arrival, units found a mobile home heavily involved with fire. The fire was extinguished quickly, but the home sustained substantial damage. The cause and origin was determined to be a faulty electrical outlet in a bedroom.