A local business has been recognized for its continued support of a statewide non-profit organization based in Statesboro. 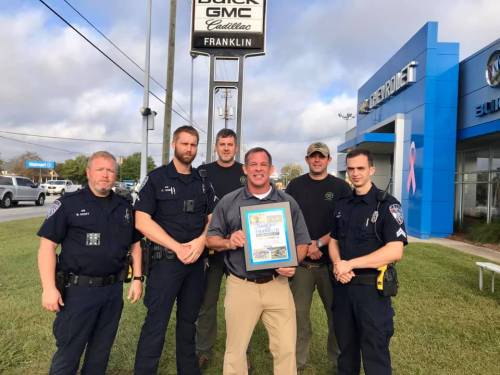 A local business has been recognized for its continued support of a statewide non-profit organization based in Statesboro.

Franklin Chevrolet Cadillac Buick GMC of Statesboro was presented with an award for its donations and support the efforts of the Georgia Police K9 Foundation.

“They are the Georgia Police K9 Foundation annual sponsor for the State of Georgia K9 Seminar which is hosted in Statesboro, Georgia. The seminar consists of bringing in top level trainers from around the world to train K9 teams from all over the State of Georgia at little to sometimes no cost. K9 Teams from across the southeast region attend this top of the line training due to Franklin Chevrolet contributions and sponsorship!

We appreciate all that they do in communities across the State of Georgia. Thank you Stephen Franklin for accepting the award! Thank you to Franklin Chevrolet of Statesboro for the support of our foundation!”

Stephen Franklin accepted the award presented by Statesboro police officers and Bulloch County Sheriff’s deputies on behalf of the dealership.

The Georgia Police K9 Foundation was launched in late 2016 in an effort to provide medical assistance to retired law enforcement K9s. In 2018, the nonprofit expanded its mission to include active K9 officers and focuses on ensuring K9s have the proper equipment – like vests, Narcan, and first aid kits – and training while educating the public on the important role K9s play in policing. As of September 30, 2019, the Foundation has provided more than  $126,000 in equipment, training, and services to K9s around the state. You can learn more about the organization here.