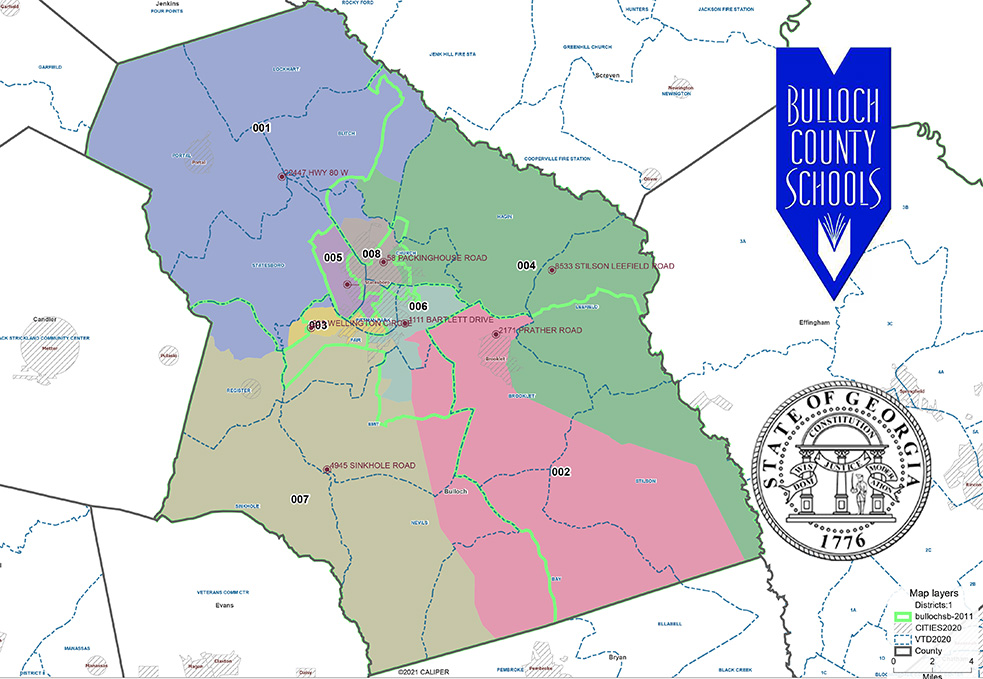 HB 871 was introduced by Representatives Tankersley of the 160th, Parrish of the 158th, and Burns of the 159th, and has been passed by both the House and Senate this session. The provisions of the Bill that relate to and are necessary for the regular election in 2022 of members of the Board of Education became effective upon approval by the Governor.

This includes updates to voting district maps due to the 2020 Census. See HB 871 and the new voting maps below.

The Board of Education voted to unanimously approve a proposed resolution and draft maps at its December 9, 2021 meeting. The state’s Office of Legislative Council drafted legislation to present to the state legislature by Bulloch County’s legislative delegation and a public notice will be made.


Boundaries for the eight districts that determine seats on the Bulloch County Board of Education have now been changed based on population data from the 2020 Census. The new maps, prepared with assistance from Georgia’s Legislative and Congressional Reapportionment Office, and resolution are posted on this webpage for review, along with the new maps. The Board will remain at eight seats with one person elected from each district. The population data does not show the need to add or remove seats.

The adjustments are necessary to keep the Board of Education and school district in compliance with the Equal Protection Clause of the United States Constitution and the Constitution of the State of Georgia, and to ensure Board districts are legitimate prior to the 2022 elections.

The Board authorized Superintendent of Schools Charles Wilson to work with Bulloch County’s legislative delegation (Senator Billy R. Hickman and Representatives Jan Tankersley, Butch Parrish and Jon Burns), on the Board’s behalf, to have the Office of Legislative Council draft legislation that sets the new board districts to be approved and to script a notice to be distributed to the public.

The final step was for the state legislature to take action to approve the legislation to be put forth by Bulloch County’s legislative delegation during the first week of the legislative session pursuant to the Official Code of Georgia § 28-1-14. This legislation has now been approved by both the Georgia House and Senate and signed by the Governor.

First Reader Summary for HB 871: A BILL to be entitled an Act to amend an Act providing for the reconstitution of the Board of Education of Bulloch County, approved April 9, 1993 (Ga. L. 1993, p. 5100), as amended, particularly by an Act approved September 21, 2011 (Ga. L. 2011 Ex. Sess., p. 462), so as to provide new district boundaries; to provide for definitions and inclusions; to provide for the continuation in office of the current members; to provide for effective dates; to repeal conflicting laws; and for other purposes.

Bulloch Co Board of Education to Have Special Session for Potential Land Acquisition Feb 22
Bulloch Board of Ed Approves Contract for Possible Land Purchase for New SEB High School
Posting....