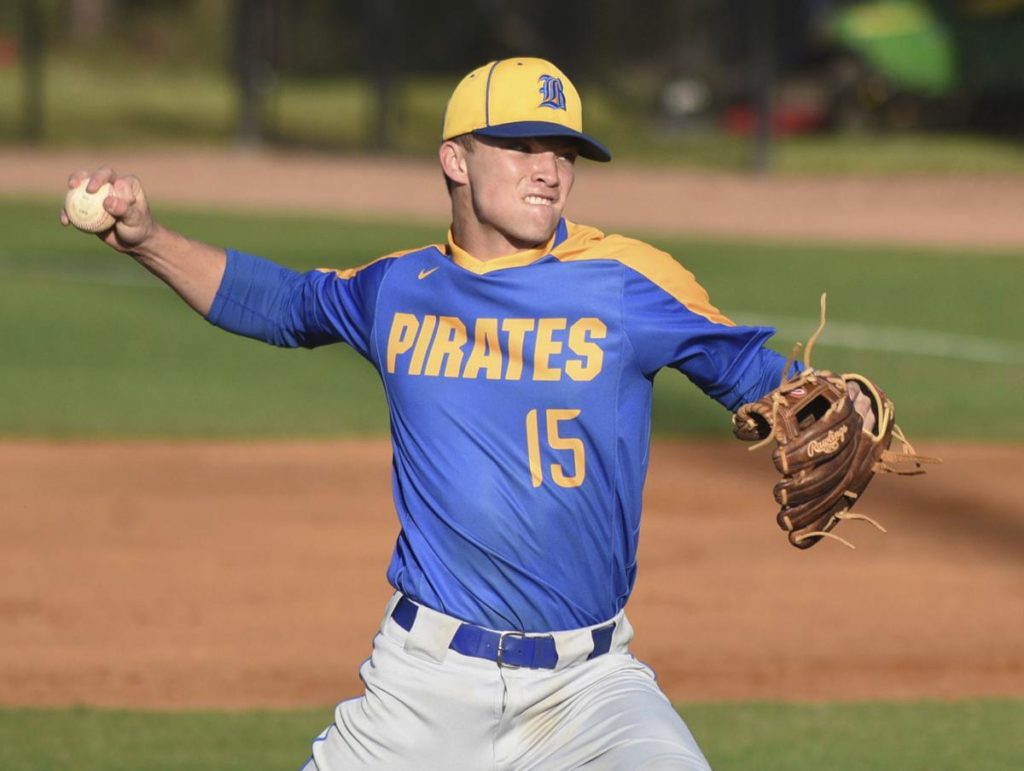 The Brunswick High baseball team held its Senior Night festivities Thursday evening prior to its non-region game at home against South Effingham.

Harrison Trawick was one of the Brunswick seniors getting recognized, but the shortstop and pitcher for the Pirates said he wouldn’t get emotional, especially considering that the game actually wasn’t the final one for him at home.

“It’ll be cool to have mom and dad on the field, but that’s about it. It won’t affect me much,” he said.

The ceremony for the seniors, though, will be among the fond memories that Trawick will have from his senior season which has been a special one to this point for the leader of the Pirates, who are 17-10 overall following a 7-3 loss to South Effingham on Thursday night.

Trawick’s goal from the start was to go out with a bang.

“I definitely worked harder this past off-season than I did in others,” Trawick said. “I wanted to spike it up this year, and it’s been a good year so far. It’s by far the best season I’ve had.”

Trawick is getting it done in the field as the Pirates’ starting shorstop. He’s been impressive on the mound, too, as the team’s ace pitcher. And, he’s producing with the bat in the lead-off position in the Brunswick order.

Trawick entered Thursday’s game against the Mustangs batting .404 with 36 hits including seven doubles, four triples and two home runs. He had 18 RBIs while scoring 26 runs and stealing 15 bases.

“I knew he could field. I knew he could pitch, but this summer he wasn’t hitting anything like what he is now. He’s finding the barrel on a very consistent basis. That’s been the biggest thing for him.”

Trawick said he hit just .290 as a junior after batting .350 as a sophomore. This spring he is hitting the ball with more pop than he did a year ago, he noted.

“Last year, I hit a lot of at-em balls. I hit it right at people a lot last year,” Trawick said. “This year, I’m hitting it a little harder, hitting the ball in the gaps. That’s made the biggest difference.

Crawford likes having Trawick batting at the top of the lineup mainly because he has the opportunity to get more at-bats than anyone in that spot.

“He sets the tone for us. He’s done a good job with that,” the coach said.

Trawick had one of his best performances at the plate two weeks ago against Bradwell Institute when he drove in six runs for the Pirates in a 13-0 victory over the Tigers.

Trawick roped a two-run homer over the fence in left in the second inning that gave the Pirates a 5-0 lead. He followed that with a bases-loaded double in the third that cleared the bases. He would steal third and score on a wild pitch.

Also before game’s end, Trawick belted a single to center field to drive in his sixth run of the game.

On the pitching rubber, Trawick has also been impressive. He owns a 5-1 record for the season with an 1.05 earned run average. He has 60 strikeouts against 10 walks in just over 46 innings and opponents are batting just .127 against him.

Crawford said his ability to move the ball around the strike zone is his best attribute.

“He has a lot of movement on his ball,” the coach said. “He has multiple pitches and has the ability to expand the zone. His fastball runs, he has a good change-up and a great slider.”

Two of Trawick’s best performances on the mound this year came in region games against Richmond Hill and rival Glynn Academy.

Against the Wildcats in the Pirates’ opening three-game region series of the season, Trawick threw a complete game for Brunswick in its 8-2 victory which was the first for the team in two years over Richmon Hill. Trawick gave up a run on a solo homer in the first and allowed just one other run as Richmond Hill tied the game at 2-2 in the fifth.

Against Glynn the next week, Trawick handcuffed the Red Terrors as the Pirates won the middle game of the three-game set 7-0. He went the distance for Brunswick, striking out nine while allowing just three hits and walking none.

“The Glynn game was good, but the Richmond Hill game was pretty good also,” Crawford said when asked about those two Trawick starts. “When the stakes are high, he rises to the occasion.”

Trawick is the unquestioned leader of the Pirates. He doesn’t necessarily do a lot of talking but his play speaks loud and clear, according to his coach.

“He doesn’t have to say much. He does that with his play,” Crawford said.

“I like the kid. I do. I like him as a person and a player. He leads by example and with his mental tenaciousness. He’s a competitor. He’s really savvy and absorbs the game really well. He competes day in and day out. We need more guys like that.”

Trawick and the Pirates will play a key Region 2-6A series next week against Effingham County and could finish anywhere from first to third in the league standings based on the results of that series and other games in the region.

That series will conclude the regular season for the Pirates and they will then set their sites on the state tournament.

Trawick hopes the Pirates have a lot of good baseball in them going forward. But once his prep career is finally over, he will start getting ready to play at the next level. He will play collegiate baseball at Piedmont College in Demorest.

“They like him as a pitcher, hitter and shortstop,” Crawford said.

And the Pirates like him in those same spots as well.

“I knew he had the skills, but he’s a bigger competitor than I thought he was,” Crawford said.