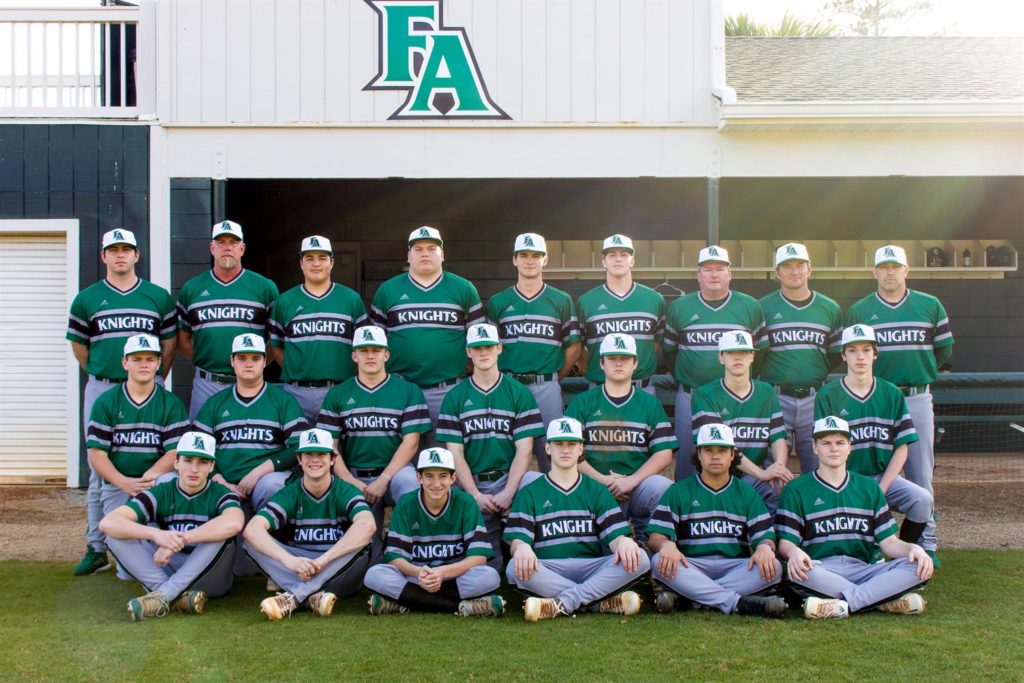 The Red Terrors won the rubber game of the series Friday night by a 4-3 score at Wainwright Field in Brunswick.

Glynn also won the opening game of series at home on Monday by a 2-0 score. The Wildcats took the middle game by a 4-1 tally on Wednesday.

The Terrors are now 21-5 overall and they finish region play with an 8-4 record. The result of next week’s Brunswick-Effingham series will determine Glynn’s seeding for the upcoming state playoffs.

On Friday against the Wildcats, the Terrors fell behind 2-0 but rallied with four runs in the third to take the lead for good. Hunter Hall drove in Glynn’s first run with a double, Griffin Bates followed with an RBI-single to tie the score and the Terrors took the lead on a run-scoring single by Hill Hartman.

Glynn added its fourth run in the frame on a sacrifice fly by Kolby Avedisian.

Richmond Hill pulled within a run in the fifth and loaded the bases with two outs in the sixth before Glynn got the final out on a play at the plate to keep the lead.

Bo Pierce recorded the last out in the sixth as he pitched in relief for Glynn. He struck out the side in the seventh to finish out the game.

Pierce was also the winning pitcher for the Terrors in the first game of the series as he threw a complete-game shutout.

The Wildcats won the second game by scoring all of their runs in the third inning. They got a three-run home run by Jackson Finley off Glynn ace Will Bowdoin.

Bowdoin gave up the four runs on six hits while striking out nine in six innings of work.

He also led the GA offense with two hits.

Glynn didn’t score until the seventh when Hartman belted a triple to score Griffin Bates who had reached on a single.

Glynn closes the regular season next week with a three-game series against Statesboro.

In other prep news:

Brunswick: The Pirates lost two non-region games against South Effingham this past week. They fell to the Mustangs 5-1 on Tuesday in Rincon before also losing 7-3 at home on Thursday while celebrating Senior Night.

On Tuesday, the Mustangs led 3-0 after two innings. Joe Smith drove in Brunswick’s only run in the fifth on a fielder’s choice. South Effingham added two more runs in the sixth.

Harrison Trawick started on the mound for the Pirates.

On Thursday, the Pirates again fell behind 5-0 before scoring a run in the fourth. Smith drove in two runs for the Pirates.

Brunswick, now 17-10 overall and 6-3 in Region 2-AAAAAA, will play Effingham in a huge region series next week that will decide the top three seeds for the state playoffs. The Rebels currently have two league losses, the Pirates have the three region losses and Glynn has finished its region schedule with four losses.

Frederica Academy: The Knights rolled to a pair of GISA Region 2-AAA wins over rival Bulloch Academy this week.

The Knights won the first meeting 6-1 and took the second contest 16-4.

Trey Tompkins got the mound win for the Knights in the first meeting, going six innings while allowing just one earned run, two hits and fanning seven.

In the second game with the Gators, the Knights exploded offensively, scoring five runs in the opening inning and continuing to score from there.

Cameron Gardner had a grand slam for the Knights. Henry Jamieson also homered for Frederica.

Eric McCall was the winning pitcher. He pitched into the fifth, allowing two earned runs while striking out eight.

Now 14-4 overall and 7-1 in league games, the Knights can wrap up the region title with a victory Tuesday at home over Bulloch.

Both teams scored in the first half. Truman Antah scored for Glynn in the match’s opening four minutes.

The Cadets tied the score at the 10-minute mark on a goal by Drew Lisicia.

Glynn is now 12-2-2 and faces Richmond Hill at home on Tuesday in a matchup that will decided the Region 2-AAAAAA championship. The Terrors lost to the Wildcats 2-1 earlier this season.

On Tuesday, they clicked to a 7-1 win over May River (S.C.) as Anne Meredith booted home five goals for the Lady Terrors. Mady Carroll scored the other two goals for Glynn.

The Knights took charge early with three goals in the first five minutes.

Jacob Meyers scored a goal for the Knights and assisted on four others while Eric Tatum scored twice. Colton Meyers and Ryan Steilen also scored for the Knights who improved to 9-1.

Brunswick dropped to 7-6-3 with the loss.

The matches were played at Richmond Hill.

The Lady Terrors won their seventh straight region title by defeating rival Brunswick in its first match and then toppling Richmond Hill in the finals.

The Terrors won their third consecutive region crown. They knocked off Bradwell Institute before defeating Effingham in the finals.

The Glynn teams are scheduled to take on Lee County next Wednesday at home in the opening round of the state tournament.

The FA players clinched state berths by finishing in the top four at the Region 2-AAA tournament this week at College of Coastal Georgia.

For the Frederica girls, Merrill Been finished as the region singles runner-up. Also in doubles, Greta Johnston and Kelly Quinn teamed up to finish second in the region.

Glynn County Sports Hall of Fame honors 2018 Ambassadors
Column: It’s good that people are homers when it comes to cheering on the local favorite
Posting....