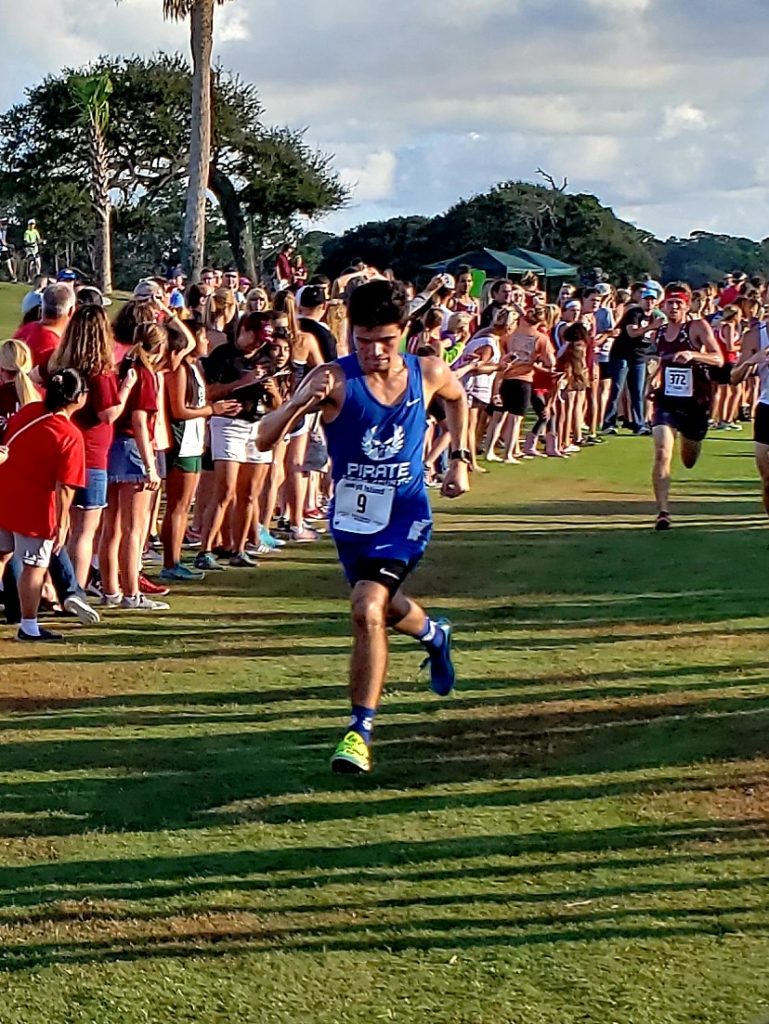 Dalton Pender describes himself as fast and energetic.

There was a time when the Brunswick High cross country standout used those attributes on the football and soccer fields.

He had to give up those sports, though, when he was diagnosed with idiopathic thrombocytopenic purpura (ITP), a blood disorder that forced him to quit playing contact sports while still in elementary school.

“I had to channel my energy in another direction,” says Pender, who is the son of BHS head football coach Sean Pender.

He chose to take up cross country in middle school and also track once he got to high school.

Pender, a senior at BHS, has excelled in both. Just last week, he won the Region 2-6A cross country meet to advance to Friday’s Class 6A state meet in Carrollton along with his Brunswick teammates as the Pirates finished third as a team in the boys competition to qualify for the state event.

Also, the Glynn Academy boys and girls teams both finished second at the region competition and will be participating in the state meet on Friday along with the Pirates.

Pender said he was terrible when he first started running with his middle-school team in Blackshear even though most of the races were less than two miles.

By his eighth grade year, though, he had improved. He was team captain and won several meets.

When he got to Pierce County High, he remembers getting “smoked” in practice by the older kids, but somehow he managed to win his first meet as a freshman with the Bears.

That set off a remarkable run by Pender through his prep career.

“I don’t think I have ever gotten beat by someone on my own team,” said Pender who takes pride in this accomplishment though he says the team aspect of cross country is something he enjoys.

Pender ran for the Bears during his freshman and sophomore years but joined the Pirates for his junior year after his dad accepted the head coaching position with the Brunswick football team and he moved here as well.

This year, he is going to state as a region champion after running a personal-best 17 minutes, 6 seconds, in the region meet last week at Richmond Hill.

Earlier this season, he ran a 17:50 on the same course when the Pirates participated in an invitational meet hosted by Richmond Hill.

“It’s always been a goal, but I wasn’t expecting it,” Pender said of winning the region championship. “In the back of my mind, I knew this might be my last race, so I wanted to give it all I had. That’s what I kept thinking.”

Pender, who also runs distance events for the BHS track team in the spring, was among the race leaders the whole time over the 3.1-mile course, but he never led until making a late push to overtake the lead runner from Richmond Hill in the last 300 meters.

He said his “good kick” at the finish made the difference.

“The Richmond Hill coach said he could see it coming when I was in the top three,” Pender said. “I used my kick and he didn’t. I guess he was a little burned out.”

Pender said he liked the course at Richmond Hill and the conditions were right for a faster than usual time.

“It’s pretty flat ground. You’re in trees most of the time. It was a fast course,” he said.

The course the runners will encounter in Carrollton, the longtime home of the state meets, is anything but flat. It has several hills along the way that add to the challenge while competing against the best runners in the state.

Friday’s Class 6A meet for the boys begins at 9 a.m. at Carrollton High School while the girls meet is slated for 9:45.

The Atlanta Track Club helps run the competitions over both Friday and Saturday for all classifications within the Georgia High School Association.

Rain is in the forecast for Thursday afternoon and evening in Carrollton which should soften the course and make for a slower track.

The Friday forecast looks favorable with temperatures expected to be in the upper 50s at race time with only a 20 percent chance of rain and little wind.