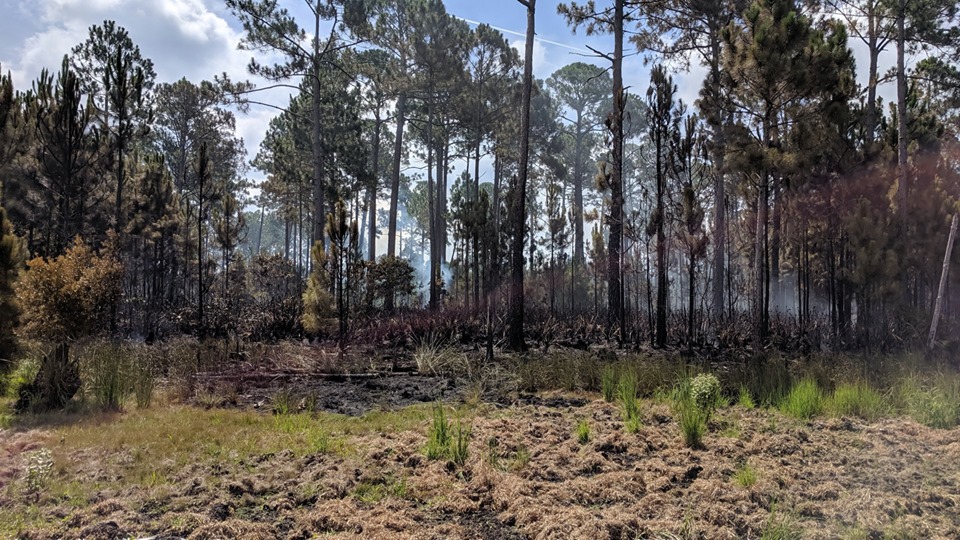 A lightning strike has ignited a wildfire, named the Whitney Fire, on the north end of Cumberland Island within designated wilderness. Ignition occurred as storm cells passed over the island late Friday night and early Saturday morning. The burned area was assessed at 30 acres as of 2:32 PM on Sunday afternoon, 6/30/19.

The western edge of the burn is along the Bunkley Trail, just north of its intersection with Brickhill Bluff Trail. The fire was exhibiting low fire activity with areas of moderate activity along its southeast edge. Fire activity is expected to increase with rising afternoon temperatures and lower humidity. All fire activity is currently located south of North Cut Road and east of Bunkley Trail.

Due to the location of the fire, all trails between South Cut trail and North Cut Road are closed to visitor access. Island tours are traveling only as far North as Plum Orchard Mansion. Brickhill Bluff campground has been closed and reservation holders are being relocated to available campgrounds.

The fire was first reported by an island resident who saw smoke on Saturday evening. Cumberland Island National Seashore fire personnel coordinated a response with support from the Georgia Forestry Commission and Okefenokee National Wildlife Refuge. Two type 6 engines are on scene and a type 3 Helicopter is providing reconnaissance flights. Fire crews will continue to provide structural protection and monitor the fire’s behavior.

Safety of island visitors, residents, employees, and structures is the primary concern. Please follow all signage as posted and speak with a Cumberland Island Ranger if you have questions regarding your visit (912)-882-4336 x 254.

Fire is an essential part of the ecosystem on Cumberland Island. Pond pine and palmettos are the primary vegetation found in the area of this burn. These species have adapted to fire and are dependent on it for reproduction and to establish a healthy succession and diversity of plant and animal life.