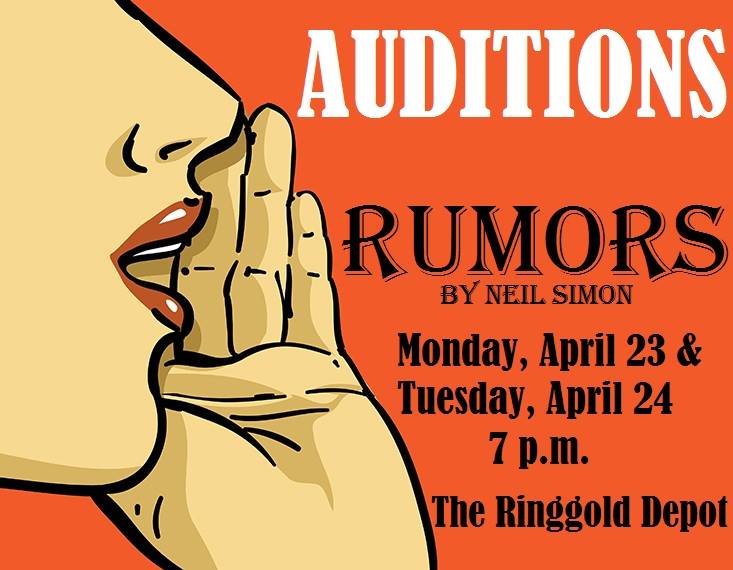 The Ringgold Playhouse will hold its third round of auditions for the 2018 Season on April 23 & 24 for Neil Simon’s classic farce “Rumors”. Auditions will take place each evening at 7 p.m. at the historic Ringgold Depot. Production dates for the show are July 19-21 & 26-28. The show is being directed by Kimberly Tyner Jones.

“Rumors” is a madcap, door-slamming farce set in a large home located just outside of New York in 1988. Charley and Myra Brock are celebrating their 10th anniversary and have invited all their good friends. Chris and Ken Gorman, a legal couple, are the first ones to arrive. They show up only to find that Myra is missing and Charley has “accidentally” shot himself in the ear during an alleged botched suicide attempt. Charley is the deputy Mayor of New York City and, hoping to avoid a scandal, Ken and Chris go about covering up what they assume to be the truth of the situation. As the rest of the guests arrive — Claire and Len Ganz, Ernie and Cookie Cusack, and Cassie and Glenn Cooper — the story of Charley and Myra’s anniversary evening gone awry grows and develops. In the end all the guests are complicit in a cover-up that no one even really understands, but the fantastical events of the evening are hilarious and give a rich basis for making the antics of seemingly mundane characters insanely hilarious.

KEN GORMAN (Male, 30s – 50s) A well-to-do lawyer. Wealthy, but by no means pretentious. Takes charge of the situation. Married to Chris. Halfway through the show, a gunshot causes his temporary deafness.

CHRIS GORMAN (Female, 30s – 50s) Another lawyer, married to Ken. Beautiful, easily flustered. Frantically tries to maintain normalcy at the party. Has recently quit smoking, which drives her to drink a bit more.

LENNY GANZ (Male 30s – 50s) – A wealthy accountant, distraught over the recent destruction over his new car. Starts the show with an extreme case of whiplash. Intolerant of the gossipy-lifestyle that he is often involved in.

CLAIRE GANZ (Female, 30s – 50s) – Lenny’s wife. Very concerned with appearances (hers and others’). Starts the play with a swollen lip. Likes to gossip.

ERNIE CUSACK (Male, 40s – 50s) – A psychiatrist. Affable, smokes a pipe. Loves his wife very much. Tries to be as helpful as possible by cooking the evening’s dinner.

COOKIE CUSACK (Female, 40s) – has her own cooking show. Suffers from extreme back spasms. Loves her husband very much. A bit absent-minded at times.

GLENN COOPER (Male, 30s – 40s) – A handsome man running for State Senate. Worried about his own reputation. Struggles with placating his wife, who is convinced he is having an affair (which he may or may not be).

CASSIE COOPER (Female late 20s, early 30s) – Glenn’s beautiful wife. Obsesses over her husbands’ relationships with other women. Quick to anger. Must rub her quartz crystal to calm herself down.

OFFICER WELCH (Male, 30s – 50s) – A city police officer having a rough night. Does not tolerate lying. Sees through the “classy” façade that these high-society types put up.

Auditions will consist of cold readings from the script. Any questions about the production can be sent to TheRinggoldPlayhouse@gmail.com. Good luck to all!