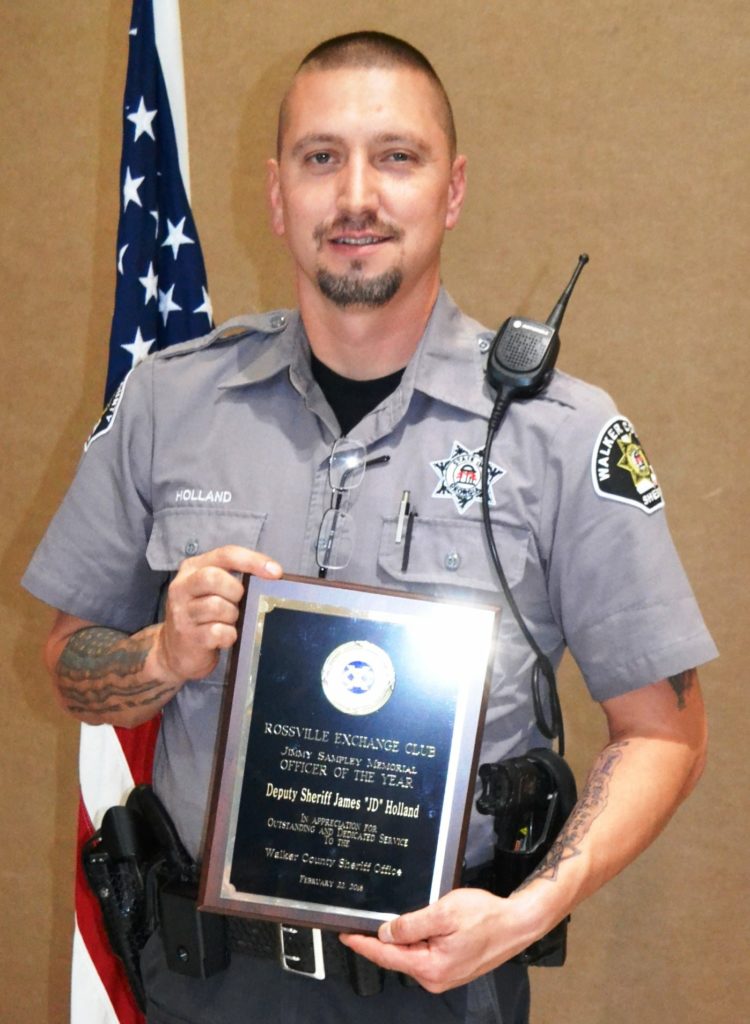 Deputy Holland began his employment with the Walker County Sheriff’s Office as a Detention Officer in May 2014 while attending the Georgia Northwestern Technical College Police Academy full time.

In October 2014, Deputy Holland was promoted to the patrol division where he was responsible for a variety of duties associated with the position of deputy sheriff. Deputy Holland consistently received excellent evaluations from his supervisors.

Over the past fourteen months, Deputy Sheriff Holland had been involved in two cases where his life has been put in danger.

On the morning of December 2, 2016 Deputy Holland was dispatched to Mission Ridge Road at North Pine Street, Rossville, Georgia, to assist Deputy Chris Wooten who had been shot at multiple times while in his patrol vehicle. The suspect was a young male who fled on foot onto a private driveway and eluded Deputy Wooten.

Deputy Holland and other deputies, including the K-9 and handler, were summoned to help locate the suspect. While in position, Deputy Holland observed the suspect hidden behind a residence.

Deputy Holland returned fire, striking the suspect and ending the threat. Deputies Holland, Griffin and Wooten were not injured.

The suspect was identified as a sixteen-year-old.

The second case occurred on the afternoon of July 3, 2017 on Caldonia Street, Rossville, Georgia.

After running through a yard and onto an adjacent street, Deputy Holland was able to bring the suspect to the ground in order to affect an arrest and to handcuff the suspect. The suspect did not comply with Deputy Holland’s orders and continued to fight and resist Deputy Holland.

As the resisting continued, Deputy Holland deployed his Taser on the suspect without success; the struggle with the suspect continued.

At this time, Deputy Holland noticed the suspect had a knife clinched in his hand. The suspect stabbed Deputy Holland in both arms, left ring finger and stabbed him in the left thigh multiple times.

As the suspect was attempting to cut Deputy Holland’s face and throat with the knife, Deputy Holland drew his service weapon and fired two shots at the suspect, striking him in the leg. The shot to the suspect’s leg disabled him and stopped the threat.

Both defendants have been charged accordingly and are awaiting trial in Walker County Superior Court.

In October 2017, Deputy Holland became the newest K-9 handler at the Sheriff’s Office when he completed basic K-9 handler school and became a certified K-9 handler.

Many law enforcement officers are fortunate to serve an entire career without ever having their life placed in jeopardy; but then 22,000 others have paid the ultimate sacrifice with their lives.

“We thank the Lord that He was watching over Deputy Holland both times that his life was put on the line as he served and protected the citizens of Walker County,” Sheriff Wilson said.

For his acts of heroism, Deputy Sheriff James David “JD” Holland was nominated by Sheriff Wilsin for the 2018 Rossville Exchange Club’s Law Enforcement Officer of the Year.

After football, Smith sees new business as a chance to give back
Reduce. Rehome. Relove.
Posting....