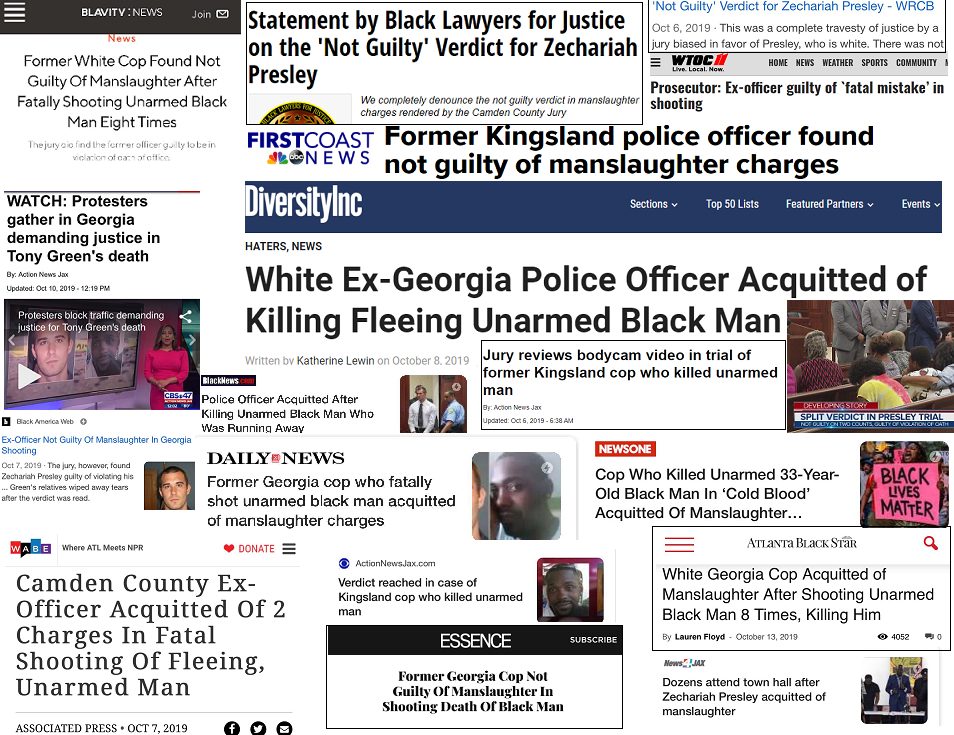 The jury was nervous about returning to the courtroom, which was once again full. Judge Scarlett told the courtroom that Contempt of Court orders were already prepared if there were any outbursts. As the clerk read the verdict as prepared by the jury and reviewed by the judge, Presley sat quietly and members of Green’s family cried audibly.

After the verdict was read, the jurors were thanked for their service and promptly dismissed. Presley’s defense attorneys told First Coast News that they planned to appeal the guilty charge based on “legal precedent.” The comment was in reference to a handful of Georgia cases that have already been overturned by the Court of Appeals when the defendant was found ‘not guilty’ of an underlying criminal charge but guilty of a violation of oath by a public officer.

Additionally, Judge Scarlett agreed to seal the jury list and the jury foreperson’s name due to “the divisive nature of the case.” He said in an Order that “the potential harm to the jury outweighed the public’s interest in his or her identity.”

Meanwhile, the racial components were no longer just undertones. Attorney Malik Z Shabazz, representing Green’s family, told the media about demands for the case be re-tried for murder. Others vocalized a desire to see the U.S. Department of Justice to investigate and prosecute the case, a step the media characterized as something done ‘in other cases with unarmed motorists.’ Protests continued and even spilled into the streets during the morning rush hour as protesters shouted ‘Justice for Tony Green!’

Green’s family was immediately outspoken. His father, Wayne Anderson, said before media outlets: “This ought to serve notice to a lot of our young black men and black men, that you can run up and down the football field, you can run on down the courts, you can hit baseballs, you can do it. But at the end of the day, when I see you, they see a black man.”

“We need to interrupt people’s conformability because if you’re comfortable right now, you shouldn’t be comfortable. You should be upset that justice wasn’t served. Injustice for one person is an injustice for all, so we need to stand together,” Peter Anderson said.

“We want to make sure that the public does not forget Tony Green or the injustice that took place in the courtroom. We’re dealing with something that’s systemic when it comes to black people being shot by unarmed black people being shot by police officers,” Diallo Sekou was quoted saying by a Jacksonville news outlet. Sekou is chairman of the Kemetic Empire, a human rights organization with principles based on the teachings of Marcus Garvey, El Hajj Malik El Shabazz ( Malcolm X), The Black Panther Party (‘60’s) Dr. Martin Luther King, and others, according to its website.

An emergency town hall was scheduled for the Friday after the verdict was announced. Pastor Mack Knight used the opportunity to reiterate his belief that the case is a story that shed light on racial disparities in Kingsland and Camden County. “He didn’t deserve to die. He didn’t deserve to be killed in the street like an animal, and we will continue to push and fight until justice is served,” Knight said in an interview.