Part I: Case Coverage Between the Shooting and the Trial 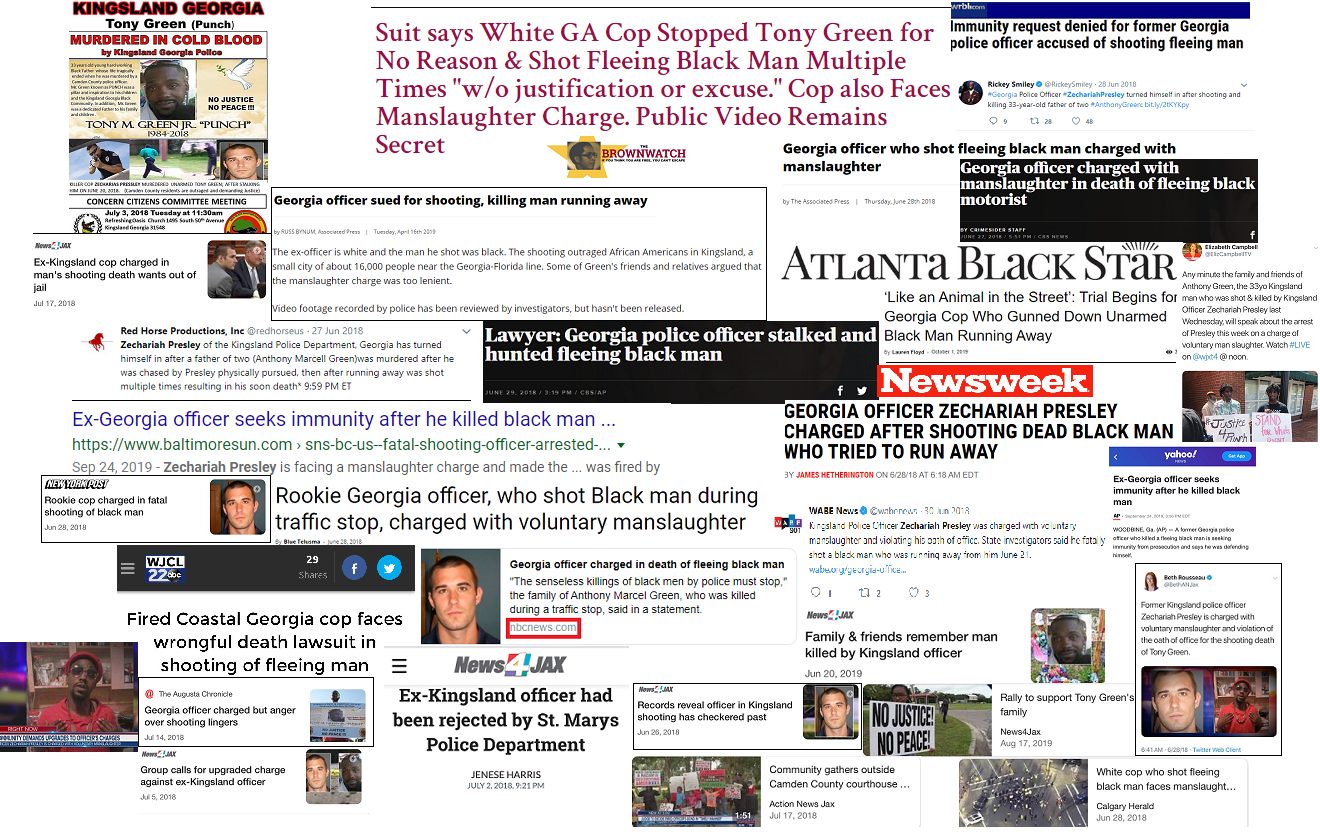 While speculation of the details dominated headlines for several days after the shooting, the focus shifted briefly to Tony Green’s criminal history before it honed in on Presley again after the Kingsland Police Department released Presley’s personnel file a week after the shooting.

Presley’s brief 13 month tenure as a police officer was scrutinized because he had been suspended for one day after he used his personal vehicle to follow a car in a pursuit that topped 100 mph. His personnel file also contained two complaints from citizens. One detailed a complaint filed by a woman who was not issued a citation but said Presley followed her for a half of a mile before stopping her over concerns of an expired tag (which was not actually expired) and a failure to use a blinker. The other stemmed from a man who said Presley was harassing him and parked outside his house. The media did not make mention that the internal investigation found the second complaint to be unfounded.

A letter of commendation from a self-identified black attorney who was issued a citation by Presley was also in his file. The letter praised Presley’s approach to law enforcement and called his professionalism ‘exceptional.’

Media outlets included incomplete data from Presley’s job application which noted ‘10 flags.’ Most did not disclose that flags are defined as ‘noteworthy’ and not necessarily grounds for disqualification from employment. Flags do, however, require further review by the hiring panel. Included in his list of flags:

Though it was not marked as a flag, Presley also admitted that he was charged with attempting to flee and elude police officers – a misdemeanor – in 2012, but the charge was later dismissed. Media reports focused heavily on a story line of Presley doing what Green had done when he was shot.

Most noticeable at the time of the coverage, the personnel file did not include details of Presley’s termination.

Green’s life, on the other hand, was mostly chronicled as a ‘hard-working father of three/four’ and an ‘unarmed black man,’ notions that remained at the forefront even after reports of Green’s 2009 guilty plea for aggravated assault, his 2014 guilty plea for cocaine possession, or a 2018 plea for obstruction of a law enforcement officer surfaced. Media coverage that referenced Green as a felon or mentioned his time behind bars was virtually nonexistent, though many did acknowledge Green was on probation at the time of the shooting. “He had kids to take care of. He was doing the right thing,” family members said of Green after the shooting.

The day after Presley’s arrest, news coverage focused on the feelings of the black community. Local resident Becki Shannon told Newsweek, “I don’t think it’s a healing time yet. I don’t think people have the hope that there’s a solution to keep this type of thing from happening again. Some are outraged and some are just blowing it off, and I don’t understand why.”

A little more than three weeks after the shooting, an Associated Press article published in news outlets around the country detailed a supposed witness statement from Anthony Dammond. In the story, Dammond told the reporter that he heard two gunshots that were close enough to his home that he got up from the couch and went outside to see a man running while clutching his leg. Dammond said that he then saw a police car come around the corner and Presley ‘swung his car into the intersection.’ He reported that the officer jumped out of his car and then fired four more shots.

The story was uncorroborated by any other information released as 24 days after the shooting, the GBI had not even detailed how many times Presley fired his weapon. Dammond’s account of the events conflicted with the story eventually released by both the state and Presley, but despite the coverage by outlets in all 50 states, no correction or retraction was issued.

Friends and family of Tony Green used an email distribution list of activists and a church congregation to garner media attention for protests and marches held in honor and memory of Green. The media attended nearly all of the press conferences and marches held and published the family’s persistent calls for tougher charges. Green’s cousin, Tony White, was quoted in a number of news articles after the arrest of Presley saying, “How can it be manslaughter? It only takes one bullet for murder.”

Meanwhile, the civil suit filed by the Green family seeking monetary damages was based on Presley’s termination from Kingsland PD and official statements made by the GBI, as no other information was released in April 2019 when the suit was filed in Camden County Superior Court.

In the week before the trial, quotes from the immunity hearing played on repeat. “He started taking off, so I fired.” The Associated Press reported that Judge Scarlett denied Presley’s argument that he felt his life was in danger, but that was not the question before the court during the immunity hearing. Instead, Judge Scarlett was charged with deciding whether or not more evidence existed to show Presley should not stand trial, as opposed to the amount of evidence that he should stand trial. Scarlett ruled that insufficient evidence was provided to show that Presley was immune, but in the immunity hearing Order, Scarlett stated in his own words that Presley was ‘distraught and fearful during and after the incident.’

Noticeably absent from all of the media coverage was any commentary by law enforcement, use of force experts, or psychologists who have previously worked or analyzed cases similar to Presley’s or any commentary on protocol after officer-involved shootings, legal rights of officers, or obligations of agencies.

Despite the sometimes around the clock coverage, Tim – the juror willing to share his perspective after the trial – and others report during jury selection that he did not recall any media coverage from the case ahead of the trial.