Secretary Sonny Perdue: “Original Intent of SNAP: A Second Chance, Not A Way of Life”

“Despite the absence of any statutory changes to the welfare reform legislation of 1996, an abuse of administrative flexibility in SNAP has undermined the ideal of self-sufficiency. “ 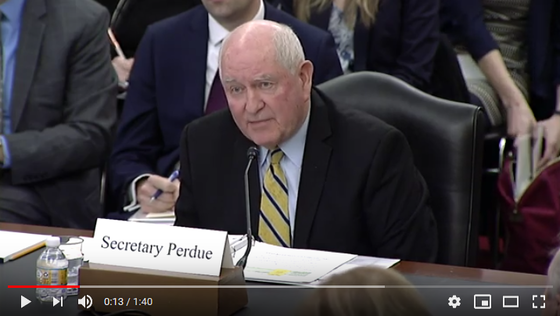 Last week, U.S. Secretary of Agriculture Sonny Perdue reiterated during a U.S. Senate hearing the need to restore the original intent of the Supplemental Nutrition Assistance Program (SNAP), which is to be a second chance and not a way of life. Secretary Perdue’s comments come on the heels of the U.S. Department of Agriculture (USDA) publishing in the Federal Register a proposed rule to move more able-bodied recipients of SNAP benefits to self-sufficiency through the dignity of work. The rule aims to restore the system to what it was meant to be: assistance through difficult times, not lifelong dependency. This proposed rule focuses on work-related program requirements for Able-Bodied Adults Without Dependents (ABAWDs) and would apply to non-disabled people, between the ages of 18 and 49, with no dependents. The rule would not apply to the elderly, the disabled, or pregnant women. Those who are eligible to receive SNAP – including the underemployed – would still qualify.

Despite the absence of any statutory changes to the welfare reform legislation of 1996, an abuse of administrative flexibility in SNAP has undermined the ideal of self-sufficiency. When then President Bill Clinton signed the legislation that instituted work requirements for ABAWDs he said, “First and foremost, it should be about moving people from welfare to work. It should impose time limits on welfare… It [work] gives structure, meaning and dignity to most of our lives.”

During today’s hearing, Secretary Perdue was asked about work requirements and his proposed rule. He said:

“What was accepted by the U.S. Senate and passed was the same bill that’s been there since the beginning of the Welfare Reform regarding the work requirements of 20 hours per week. And what you also passed was not a prohibition, it was no change to the fact that in one section it says that the Secretary may waive that applicability and we plan to do that for the ABAWDs. We think the purpose is to help people move to independency… We should help people when they are down but that should not be interminably.”

“…You all also provided for a 12 percent cushion for states that they could use for any purpose. But, we do not believe in states where unemployment is 4 percent that ABAWDs should be able to stay on food assistance interminably.”

This is a press release from the USDA.