HUD Reports Homelessness Unchanged in U.S. in 2018 with Notable Declines Among Veterans & Families with Children 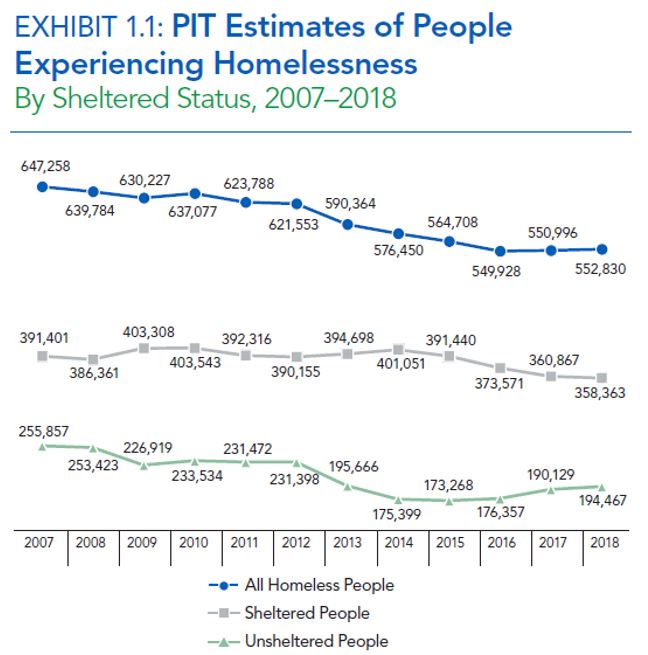 Homelessness in the U.S. remained largely unchanged in 2018, according to the latest national estimate by the U.S. Department of Housing and Urban Development (HUD). HUD’s 2018 Annual Homeless Assessment Report to Congress found that 552,830 persons experienced homelessness on a single night in 2018, an increase of 0.3 percent since last year. Meanwhile, homelessness among veterans fell 5.4 percent and homelessness experienced by families with children declined 2.7 percent nationwide since 2017.

As in previous years, there is significant local variation in the data reported from different parts of the country. Thirty-one (31) states and the District of Columbia reported decreases in homelessness between 2017 and 2018 while 19 states reported increases in the number of persons experiencing homelessness.

“Our state and local partners are increasingly focused on finding lasting solutions to homelessness even as they struggle against the headwinds of rising rents,” said HUD Secretary Ben Carson. “Much progress is being made and much work remains to be done but I have great hope that communities all across our nation are intent on preventing and ending homelessness.”

“Communities across the country are getting better and better at making sure that people exit homelessness quickly through Housing First approaches,” said Matthew Doherty, executive director of the U.S. Interagency Council on Homelessness. “We know, however, that a lack of housing that people can afford is the fundamental obstacle to making further progress in many communities.”

HUD’s national estimate is based upon data reported by approximately 3,000 cities and counties across the nation. Every year on a single night in January, planning agencies called ‘Continuums of Care’, along with tens of thousands of volunteers, seek to identify the number of individuals and families living in emergency shelters, transitional housing programs and in unsheltered settings. These one-night ‘snapshot’ counts, as well as full-year counts and data from other sources (U.S. Housing Survey, Department of Education), are crucial in understanding the scope of homelessness and measuring progress toward reducing it.

On a single night in January 2018, state and local planning agencies (Continuums of Care) reported:

HUD’s latest national estimate notes a continuing decline in family homelessness in the U.S. In January of 2018, there were 56,342 family households with children experiencing homelessness, a 29 percent decline since 2010. These declines are largely a consequence of HUD’s policy shift from supporting higher cost transitional housing to rapid rehousing programs across the country. Following HUD’s guidance and best practices, local planners are increasingly using rapid rehousing to move families into permanent housing more quickly and at lower cost. Communities are also implementing more prevention activities to help families avoid needing shelter as well as more robust coordinated entry efforts. Taken together, these ‘Housing First’ models have proven to be a more effective and efficient response to help families experiencing temporary crisis as well as those enduring the most chronic forms of homelessness.

Veteran homelessness in the U.S. is nearly half of what was reported in 2010. Last year alone, the number of homeless veterans declined by 5.4 percent and homelessness experienced by female veterans dropped by nearly 10 percent. These declines are the result of intense planning and targeted interventions, including the close collaboration between HUD and the U.S. Department of Veterans Affairs (VA). Both agencies jointly administer the HUD-VA Supportive Housing (HUD-VASH) Program, which combines permanent HUD rental assistance with case management and clinical services provided by the VA. This year, more than 4,400 veterans, many experiencing chronic forms of homelessness, will find permanent housing and critically needed support services through the HUD-VASH program. An additional 50,000 veterans found permanent housing and supportive services through VA’s continuum of homeless programs.

Long-term or chronic homelessness among individuals with disabilities grew by 2.2 percent since 2017 though is 16.4 percent below the levels reported in 2010. This longer trend is due in part to a concerted effort to make more permanent supportive housing opportunities more available for people with disabling health conditions who otherwise continually cycle through local shelters or the streets. Research demonstrates that for those experiencing chronic homelessness, providing permanent housing, coupled with appropriate low-barrier supportive services, is the most effective solution for ending homelessness. This ‘housing first’ approach also saves the taxpayer considerable money by interrupting a costly cycle of emergency room and hospital, detox, and even jail visits.