As the weather gets warmer and more people start hitting the beach, taking heed of the surf conditions and warnings can save your life.

What started out as a relaxing day on the water for Tasha and Rob of Turtle Tides turned into a rescue mission at Gould’s Inlet on St. Simon’s Island.

According to Tasha, a tour guide for Turtle Tides- a paddleboard and kayak rental and ecotour company on St. Simon’s Island, Rob sprang into action when faced with the harrowing experience.

“Yesterday, while Rob and I were paddling out to catch some waves. Rob noticed a woman swimming in the middle of the inlet at Gould’s. She was caught in the middle of a rip tide. She was swimming as hard as she could. She flipped to her back and started yelling for help. She was exhausted. Rob rushed over to her and got her to shore. Once she was on the shore, she thanked Rob and walked away. She was all alone.”

Thanks to Rob’s important life saving skills as a retired Homeland Security Officer/Instructor and First Responder, he has a keen sense of awareness when he is out on the water and his quick response saved this woman’s life.

Tasha went on to say of her fiance’, “Had it not been for Rob, I’m scared to say what may have happened to this woman.  Thank goodness Rob was able to save this woman. You are such a hero and more, babe.” 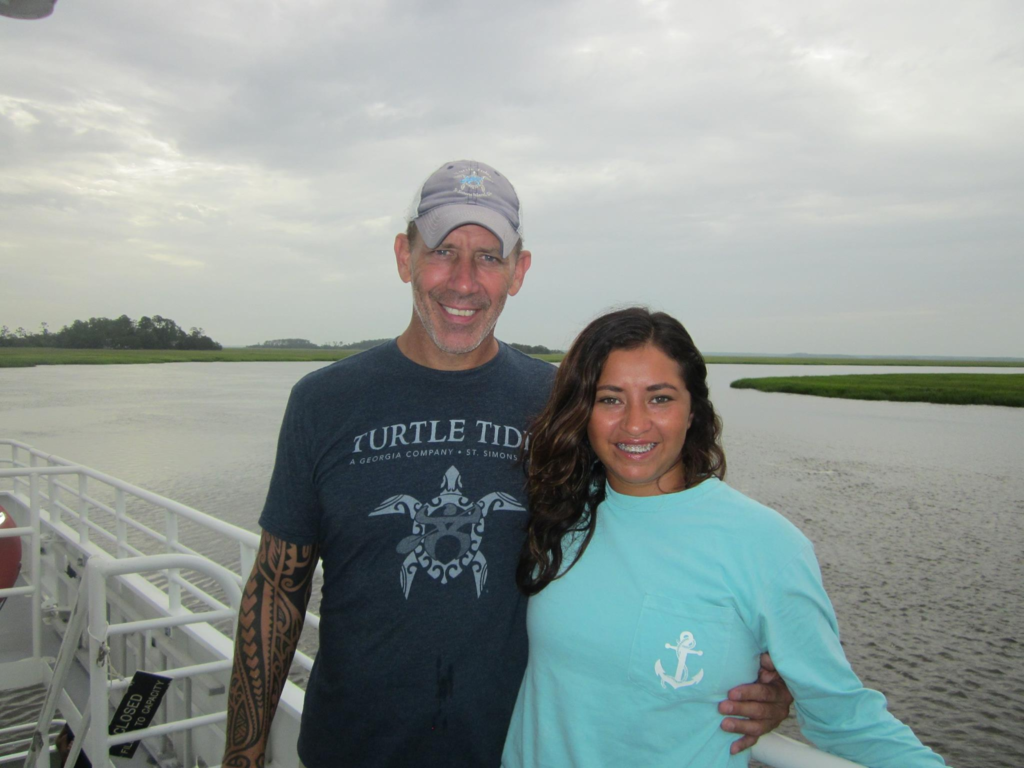 On any given day the waters along our coastline of the Golden Isles can look enticing enough for a peaceful paddle or a refreshing swim.  But what lies underneath can be dangerous and even deadly.

According to the U.S. Lifesaving Association (USLA), more than 80 percent of the surf beach rescues performed by lifeguards each year involve rip currents and they account for at least 100 deaths each year at U.S. surf beaches.

The National Ocean Service for NOAA explains rip currents in this way:

“When waves travel from deep to shallow water, they break near the shoreline and generate currents. A rip current forms when a narrow, fast-moving section of water travels in an offshore direction. Rip current speeds as high as 8 feet per second have been measured–faster than an Olympic swimmer can sprint! This makes rip currents especially dangerous to beach goers as these currents can sweep even the strongest swimmer out to sea.”

“Because rip currents move perpendicular to shore and can be very strong, beach swimmers need to be careful. A person caught in a rip can be swept away from shore very quickly. The best way to escape a rip current is by swimming parallel to the shore instead of towards it, since most rip currents are less than 80 feet wide. A swimmer can also let the current carry him or her out to sea until the force weakens, because rip currents stay close to shore and usually dissipate just beyond the line of breaking waves. Occasionally, however, a rip current can push someone hundreds of yards offshore. The most important thing to remember if you are ever caught in a rip current is not to panic. Continue to breathe, try to keep your head above water, and don’t exhaust yourself fighting against the force of the current.”

Raffensperger Calling On Local Groups to Help with November Election