The College of Coastal GA hosted their second session of Let’s Talk amid the kneeling of the basketball team to promote civil discussion. 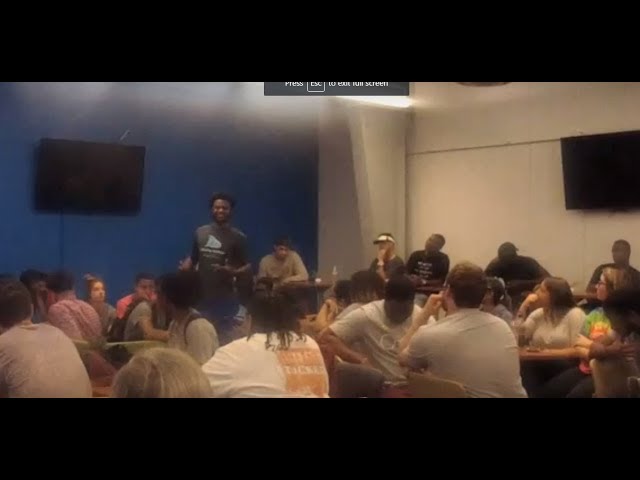 The second Let’s Talk session at the College of Coastal Georgia drew in over 120 people on Tuesday afternoon. The goal of the session was to create a civil dialogue about issues surrounding the kneeling of the basketball team.

Many students and residents were in attendance showing their support and opposition to the kneeling.

Dr. Michael Butcher, Assistant Vice President of Student Affairs at the College of Coastal Georgia (CCGA) opened up with a statement that saying the college reveres the national anthem and its flag. CCGA’s also mentioned that individuals should stand for the flag as well as the national anthem. Dr. Butcher further added that the college also respects the constitutional right of their students to exercise their right to freedom of speech as protected under the First Amendment.

John Wilson, a student,  started the discussion saying he did not support the protest and asked some of the basketball players what and why they were protesting.

One player replied, “Inequalities in America and everything going on with police brutality. We love our flag, and we love America. This as nothing to do with the flag at all.”

The player further said, along with many others in attendance, the reason the players knelt at the game is that such a venue gains more attention by the public, and it is a way to bring awareness.

Someone else asked why the players could just stay in the locker room until after the national anthem has played. According to one of the basketball players, they met two weeks before their first game to decide to kneel instead of staying in the locker room.

“So if you guys are really passionate about this, what organizations have you volunteered at to spread your message?” said Wilson.

“Life is education, and only a few get special school. Most people do not get to go to college. The president of the school that I went to l told me that it is never right to do wrong to get a chance to do right. You said you had a right to do this [kneel]. If you think you do have that right, then I have a right to stand up every time two points are made and say boo,” said Chapman.  ” If you do not have a real reason for why you are doing this, then do not dishonor the flag.”

“At the end of the day, they are the ones that are going to withstand what is going to happen. We are at a college, and this is a place where you can show your views. Your mind should be open to other views. The only place you can express that is here. We feel there is something wrong and there is social injustice. If you don’t say anything, nothing is going to happen,” said Jones.

A Navy veteran, William Everett, said he understands both sides of the issues and he served his country so that the players had the freedom to take a knee.

“I would never take a knee for the flag, but I understand why they did that. I served for them to have that right, and they have that right. This is not about the flag; this is a race thing. In forty years, we have not changed at all. Why can’t it just be about being as one? Why does it have to be about black and white? Let’s stop worrying about the flag and the NFL.  Let’s worry about homeless veterans.”

Another student voiced the concern that the tuition he pays to the school should not go to support political activity on campus such as kneeling. Also, the same student stated he had a petition of over 150 students that felt the same way.

The moderator of the discussion told the student he could talk to Dr. Butcher about the petition at a later time.

A student named Jersey said that we should be grateful that we live in a country that allows people to convene in a place to discuss their differences.

“This is an idea. This means freedom of speech and the ability to disagree. This is something to be celebrated. What is getting lost here is the message.”

One student thanked the veterans in the room for her freedom and then praised the actions of the basketball players for showing her a display of freedom through kneeling.

” The First Amendment says we can do this and we are not hurting anybody. We are not perfect. I am not going to kneel for the anthem, but I am going to hold your hand.”

Another veteran that said the message appears to be getting lost in a black-white debate. He stated that he served for others to have freedom of speech.

“Let’s be honest, half of the country has done nothing for the flag. Most of the people are sitting and complaining, but at some point and time human life is way more important than a piece of fabric.”

Vietnam Veteran, Jay Moreno, read a statement that he commented in the local paper’s e-edition to the crowd and gave a warning that some might find it uncomfortable. (start time 1:16:45)

Part of his statement said that “many of the players probably could not fully describe their rights under the First and Fourteen Amendment to the Constitution; who we declared our independence from in 1776; what George Washington and Thomas Jefferson were noted for other than owning slaves; who the Great Emancipator was, much less he was a Republican. However, if you give them a minute to Google all of those things using their auxiliary brains known as their iPhones in the midst of their racist oppressors. Not one of those heavily subsidized student-athletes has ever been a slave and has ever been denied equality of opportunity.”

Moreno’s comments further went on to describe the players as a “snowflake generation.”

A student responded to his comments by saying he does know of the First Amendment and that he could paraphrase.

“Congress shall make no law regarding the prevents students and people within the institution from petitioning the government and filing their grievances. That is not the entire thing, but that is the part that is focusing on this institution. Because this prevents the injustices on the African-American in the United States of America.”

Moreno hands the student his comments to help him with his rebuttal, and the student states that he knows who the Great Emancipator was and that it was Abraham Lincoln. “He was a Republican before the great switch of the Democratic and Republican parties and their ideal systems. He was considered a Republican in 1864, and he is no longer a Republican. He is considered a Democrat based on his ideas today.”

Another gentleman stated that there is a great wall that is dividing this country separating everyone.

“There is a wall in America that is thick, tough, and it is going to stay there. There is one thing in this world that will knock down this wall, and that is Jesus Christ.”

Other students stated that society needs to get past the stereotype of the African-American male.

“The black man is not someone is sagging pants, and we are not all criminals. The media perpetuates stereotypes. Drug dealers and gangsters. Why can’t we be like Obama, or Stephen Curry, or Nelson Mandela? This is what a lot of people believe. I do not fit that. We need to stop and listen to one another.”

A retired Navy veteran stated that our country is falling at the hands of revisionist history and that appears to be creating division in this country.

“If I say stars and bars, does that get anybody’s attention? Does that incite you? Does that make you upset? Do you have animosity when you here the terms stars and bars? If you do not know what that is, that is a Confederate Battle flag. Here is my thing… you might have as much animus in your heart for the stars and bars, but you have no clue about the animus in our hearts as veterans about for that flag that is flying now that is protecting every single American on this soil.

You complain about injustices in America. God knows we’ve got it. Try this in a different country and find out how bad it is there. What is one thing are we going to stand behind to unite us as people, as a college, as brothers and sisters? I have brought people home [died] under that flag. I do not think anyone has a right to kneel who has not known someone who has come home under that flag. This is not because of a political viewpoint; that person laid their life on the line, shed their blood, and some came back with their body parts missing and brains missing due to PTSD. We go to the basketball to see you all succeed; not to see y’all protest.”

Other students, like Brittney, reminded that the kneeling was done on a platform to gain the attention about injustices and the norms that it has set in society.

“It boils down to power and privilege. You have those that tend to ignore it; you have those that do not want to say anything because they do not want to cause a problem; then you have those like me. I am a true believer that we need to agree to disagree. This is something that should have been addressed a long time ago. The inequality has always been there. We have a group of people that had a 300-year start of being privileged, and we have assumed an inherently racist system.  It starts with education. You have this norm that has gone on forever, and people do not pay it any mind because it is the norm. It is not just African-American history; it is all of our histories.”

The session ended with the moderator saying that what was achieved in the session was a way to talk to people with whom we disagree.  The moderator encouraged students not only to speak to those they agree with, but who they disagree with civilly.