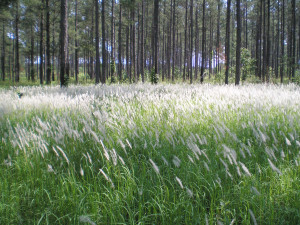 Local landscapes come alive in springtime with beautiful buds, sprouts, and flowers. Georgia Forestry Commission (GFC) forest health specialists are requesting, however, we “be on the lookout,” for an invasive weed disguised as an attractive, wispy grass that’s especially visible in April.

“Cogongrass is classified as one of the 10 worst weeds in the world,” said Georgia Forestry Commission Forest Health Coordinator Lynne Womack. “It’s especially bad because it crowds out native ecosystems of both plants and animals, and is threatening endangered species. It’s also very flammable, which is extremely hazardous this year because of the high fire danger we’re experiencing.”

According to Womack, between April and June, cogongrass goes into its flowering stage, producing fluffy, white, plume-like seed heads. As many as 3,000 seeds can be found on a single head, and the seeds’ silky hairs are blown free and scattered by the wind, similar to dandelion seeds. Additional ways to identify cogongrass include yellow-green leaf blades with serrated edges that are rough to the touch, and a circular, thatch-like growth pattern.

Cogongrass was accidentally introduced to the U.S. in 1912 via orange crate packing material from Japan. Since then, it has spread and been discovered across 1.25 million acres in the Southeast.

The Georgia Forestry Commission has been tracking cogongrass infestations since the early 2000s and monitors its progression and suppression. The GFC investigates reports of cogongrass sightings and treats detections for landowners at no cost. While most cogongrass outbreaks have been in the southwestern portions of the state, the noxious weed has been discovered in other locations throughout Georgia. It appears frequently in pine woodlands, vehicle rights-of-way, open pastures, and even home landscapes, coastal dunes, and golf courses.

“We need all outdoor enthusiasts to keep an eye out for cogongrass,” said Womack. “If you see it or think you may have, call your local office of the Georgia Forestry Commission. You’ll be doing your part to keep Georgia’s forestland healthy and supporting our important native ecosystems.”

For more information about this invasive weed, forest health, and services of the Georgia Forestry Commission, visit gatrees.org/cogongrass-in-georgia/.