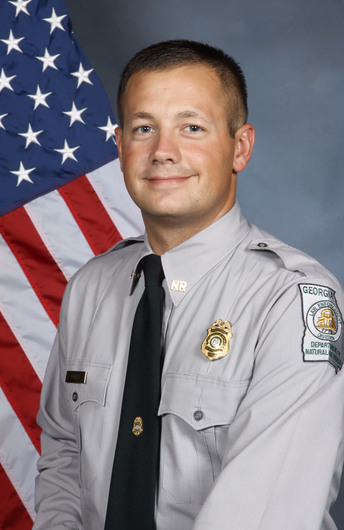 Catching poachers and other wildlife violators often involves lengthy criminal investigations and requires diligence and skill for Game Wardens. Cpl. Quinn Fogle, who is assigned to Early County in southwest Georgia, has been named Georgia DNR Law Enforcement’s 2018 Investigative Game Warden of the Year for demonstrating tenacity and excellence in his work, which included a complex case with multiple violators and 89 charges for wildlife violations.

“I commend Cpl. Fogle for his drive and continued efforts to apprehend violators who damage our natural resources,” said Col. Thomas Barnard, director of the Georgia DNR Law Enforcement Division. “His commitment to the investigative work in this case, while continuing his regular duties, shows what a great asset he is to the Department and especially to Georgia citizens.”

Cpl. Fogle’s biggest investigation last year involved a poaching case in Early County. The case began with a complaint about an illegally killed deer that had been posted on social media. Over the next few weeks, Fogle gathered information the suspect and other suspects possibly involved in criminal activities, conducted interviews with suspects, and through search warrants, collected physical evidence, including nearly 7,400 pages from social media and cell phone accounts. After over 300 hours of Fogle’s time invested in this investigation, 83 arrest warrants were issued for 10 suspects.

Additionally, as a result of Fogle’s case, the Early County Sheriff’s Office made charges in a felony drug case and the Houston County Alabama Sheriff’s Office received information to help solve the theft of two golf carts and a trailer.

The Georgia Chapter of the Safari Club International sponsors this award. For more information about that organization, visit www.gasci.org .

Cpl. Fogle has been with the Georgia Department of Natural Resources Law Enforcement Division since 2013.