Peter Enns’ latest book reads like the average village atheist attempting to discredit the Bible, all the while assuring you that he’s a Christian trying to illuminate you on how to build your faith. It’s basically a re-hash of similar concepts we’ve seen before in his previous writings and reiterates that while the Bible doesn’t contain the truth, you can still believe and trust in God (whoever that might be).

“Let me be abso-posi-lutely clear about something so we don’t get off on the wrong foot: there’s absolutely nothing wrong with thinking about God or even seeking to think “correctly” about God.”

Shortly thereafter he explains the kind of faith he believes is wrong;

“ … one that needs correct thinking in order to survive.”

Enns is right that believers don’t need to have consistently correct thinking or beliefs about God to ‘survive’ as a Christian. But the reason why we may have incorrect beliefs is the crux of the matter.

Undoubtedly every Christian (as flawed human beings affected by sin) has some incorrect beliefs about God. That is because of our fallibility and limited understanding. 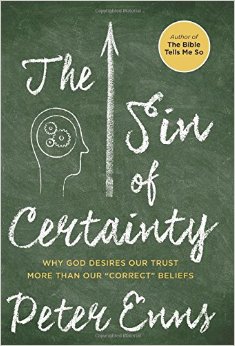 wrong is because what God’s word plainly says is wrong, not because of our limited understanding (i.e. it’s God’s fault we believe wrong things!).

The subtitle of Enns’ book is ‘Why God desires our trust more than our ‘correct’ beliefs’. He opines throughout on what he believes is the church’s (and the majority of Christians’) unhealthy emphasis on having correct beliefs and champions ‘deep trust’ in God instead.

Unfortunately almost the entire book highlights all of the contradictions, errors and wrong thinking that Enns says the Bible contains which caused him and many others to doubt its validity as real history!

“Is the Bible’s role really to give us certainty about what happened in the past … ?”1

He outlines “ … four rapid punches to the chin within about thirty years”2 that the Bible supposedly took years ago that prove it can’t be trusted as plainly written.

All of his arguments are rather simplistic and have been answered numerous times by various Christian apologists. A search on Creation.com for example reveals plenty of articles soundly dealing with each of them and it is surprising to find someone who declares himself a believer buying into such weak arguments against his professed faith.

For example in the chapter ‘Slavery: Whose side is God on?’ he accuses the Bible of teaching contrary doctrines (an all too common attack by naïve atheists) where he says;

“On the one hand, slavery in the Bible was a given, and slaves were the property of the owner, just as in every other ancient society.”7

“On the other hand, some saw the exodus story as proof that God is in the business of liberating slaves.”8

But of course the story of the exodus isn’t the reason we know the Bible doesn’t condone slavery, it is because God’s word strictly forbids it!

“Whoever steals a man and sells him, and anyone found in possession of him, shall be put to death.” (Exodus 21:16)

Man-stealing, man-selling and man-holding is slavery. These are all acts done to people against their will. But there is a big difference between this and indentured servitude (which is what Enns describes as slavery) defined in the Bible.

Indentured servitude in the Old Testament was a wilfull arrangement (by both parties) where someone could enter into a binding work contract with someone else to survive in a situation where they probably wouldn’t have in a far less civilized era before government welfare programs existed.

However, Enns quotes Exodus 21:20-21 and equates it to slavery such as the African American slave trade (where Africans rounded up Africans and sold them to American slave owners) when he says;

“I wonder whether African slaves ever felt like God had painted a number on their backs.”

But this is completely out of context. How could a seminary educated individual and Bible teacher like Enns not know this?

In his chapter on evolution Enns admits what Genesis plainly says.

“The problem for biblically centered Christians is that the Bible, right in the very beginning, tells us clearly that God created all life forms with a simple “Let there be … ” No common descent, natural selection, or billions of years required. So if Darwin was right, the Bible was wrong.”2

Now Enns is a committed theistic evolutionist and hence this isn’t a ‘problem’ for him. Which reveals he isn’t a ‘biblically centered Christian’. And he believes Darwin was right, which means he believes the Bible is wrong!

This would mean that God knowingly put contradictions in His word (or else the Bible isn’t actually inspired although Enns doesn’t comment on this directly). But proclaiming known contradictions amounts to lying (which is likely why Enns has a chapter blasphemously titled ‘God is a liar’9).

(But of course that could just be one of those parts of the Bible you don’t have to take as plainly written in Enns’ way of thinking.)

For Enns the truth of the Bible isn’t what’s important, it’s ‘trust’ in God. Of course the word ‘trust’ is defined as; ‘firm belief in the reliability, truth, ability, or strength of someone or something’. So Enns shoots himself in the foot in his basic premise. How are Christians supposed to trust in God if His revelation to His people is un-trustworthy?

Enns’ approach is much like the ‘fuzzy’ emergent church musings of Rob Bell and Brian McLaren (both of whom also believe in evolution as fact). Because of their ‘non-absolutist’ writing style careful analysis is required to prevent being drawn into their nonsensical way of thinking. For example Enns says;

“This book is about thinking differently about faith, a faith that is not so much defined as by what we believe but in whom we trust. In fact, in this book I argue that we have misunderstood faith as a what word rather than a who word—as primarily beliefs about rather than primarily as trust in.” (Page 22)

“Trust works regardless of where our thinking happens to be at the moment. But when correct thinking is central to faith, we transmit onto God our own distorted mental image of God, with all its baggage, hang-ups and deep fears.” (Page 23)

This may sound rather deep and enlightening until you break it down. According to Enns, faith is a ‘who’ word. OK, so who am I to trust? Well, God. But who God is can only be determined by special revelation.

General revelation is sufficient for anyone to know that God exists (because of the creation as per Romans 1:20), but the details of who God is, what He has done in the past, what He will do in the future, His plan of salvation, His character etc. is only revealed in the Bible. So without a trustworthy source of revelation I could not know whether I was trusting in the true God or a figment of my imagination (see below).

Incredibly, Enns spends an inordinate amount of time quoting Scripture authoritatively and telling you what he thinks it means to convince you that you can’t take it as plainly written (authoritatively) which is self-defeating.

So Enns is wrong in saying focusing on ‘correct thinking’ leads to creating God into our own ‘distorted mental image’, it is rather focusing on wrong thinking (by definition) that does so!

What kind of God does Enns believe in?

Enns says he used to be orthodox in his thinking. What caused him to view God differently? A Disney movie on a plane trip!

“A fifty-two second exchange in a movie … And the next thing I know, my view of God flies away as if sucked out the window due to a loss of cabin pressure.”10

Recounting watching Disney’s Bridge to Terabithia he describes an exchange between two young girls discussing the Bible. Leslie (a non-Christian) announces “I seriously do not think God goes around damning people to hell. He’s too busy running all this … ”

“How was I to know that the company that gave us Mickey Mouse, Goofy, and Son of Flubber would venture deep into a religious debate? I was just minding my own business at thirty thousand feet over the Midwest and was caught off guard. Me—a professional Christian, a seminary professor paid to think right thoughts about God and to tell others about them. But after a long trip, my orthodoxy shield was resting at my side. I was unarmed, and Leslie’s words hit their mark. In a flash and without words, I thought quietly to myself, I think Leslie’s right.

The idea that the Creator of heaven and Earth, with all their beauty, wonder, and mystery, was at the same time a supersized Bible thumping preacher, obsessed with whether our thoughts were all in place and ready to condemn us to eternity to hell if they weren’t, made no sense—even though that was my operating (though unexamined) assumption as long as I could remember.”

Now the idea that a seminary trained Christian Professor’s belief in God was devastated by a fictional children’s character making such a simplistic ‘objection’ is bad enough. But the fact that the view he had of God was of a ‘supersized Bible thumping preacher’ should set alarm bells ringing for believers as to whether Enns has ever known who God is.

In fact Enns reveals that he believes in a god that he wants to believe in (rather than the God revealed in Scripture):

And ultimately he admits he’s thought this way for a long time;

“ … judging by an old journal I stumbled on from my early twenties, these themes have been my home base for over thirty years.”12

Certain that certainty is sin

“All this to say that a faith in a living God that is preoccupied with certainty is sin, for it compromises the gospel—personally, locally, and globally.”13

But how does Enns know this (he seems preoccupied with repeating it throughout his book and sounds quite certain about it)? He cannot point to a specific Scripture to back it up, and even if he tried to use words from the Bible to verify his claim he has already stated that the words in the Bible are not ultimately trustworthy. So Enns is just relying on his own mind to determine truth. He has become the god he follows.

Enns is excellent at posing questions that supposedly ‘expose’ contradictions in the text in order to dismiss the plain reading of Scripture as valid. But like most modern theological de-constructionists, he never then gives you a replacement interpretive methodology that should be applied except for his opinion.

Half way through the book one feels like Mowgli from the Jungle book, all wrapped up in the ever tightening coils of the serpent Kaa mesmerized by the hypnotizing drone of “Trust in me, just in meeeee!”

This is likely to leave any reader that adopts his ideas to logically conclude that there is no universal way to understand Scripture and that whatever you decide to think or feel about the text is OK.

A wolf in sheep’s clothing

2 Peter 2:1 says “ … there will be false teachers among you, who will secretly bring in destructive heresies, even denying the Master who bought them, bringing upon themselves swift destruction.”

It’s hard not to think of Enns in this way. If I were (still) an atheist and I wanted a resource to try and steer someone away from the Christian faith in a ‘friendly’ way I don’t think I could find a better means to do so than give them a copy of his book.