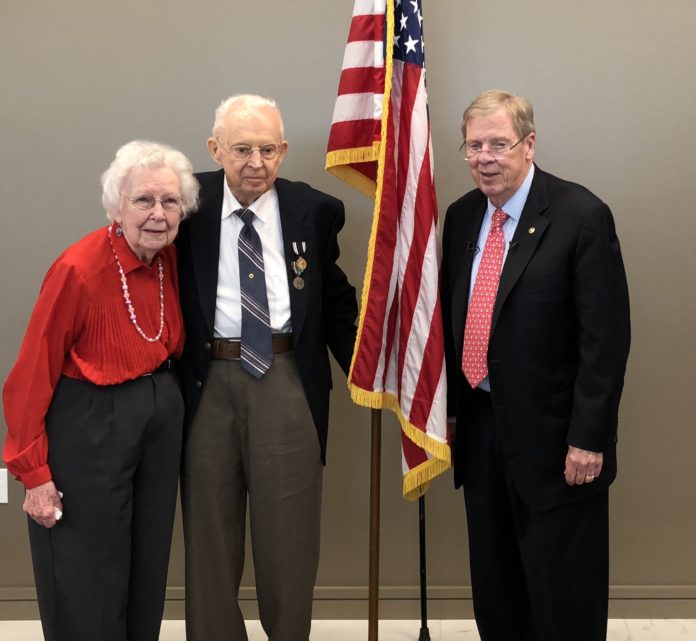 While serving in the U.S. Army, Rumsey was captured in Germany and held prisoner for nearly six months from April 15 to October 12, 1945, according to his official file at the U.S. National Archives.

“Our veterans are all incredibly special and have sacrificed so much for our country, and those who were captured as prisoners of war hold a particularly special place,” said Isakson. “My. Rumsey is my hero, and it’s my honor to finally present him with the medal he earned in his service to our country. His service is what your country is all about, and the young people today are inspired by you to be the next generation to risk fighting on behalf of the best country on the Earth.”

Rumsey said, “I never really felt scared, I guess because I was young. I was proud to serve my country as so many did during World War II. It means a great deal to me and my family to have this medal acknowledging my service and absolute commitment to my country.”

The Prisoner of War Medal was authorized by Congress and signed into law in 1985. Eligibility for the award includes any person who, while serving in any capacity with the U.S. armed forces, was taken prisoner and held captive after April 5, 1917.

During his service, in addition to the Prisoner of War Medal, Rumsey earned the Good Conduct Medal, the American Theater Ribbon, the Middle Eastern Campaign Medal along with two Bronze Service Stars, and the World War II Victory Ribbon.

Rumsey spoke of his experiences in a video interview with the Marietta Daily Journal as part of its “Memories of War” series. The recorded interview was published on March 18, 2017, and filmed by photographer Kelly D. Huff. The video interview can be found online here.

Mr. Rumsey and his wife, Ruby, reside in Woodstock, Ga. He has a son and a step-daughter.