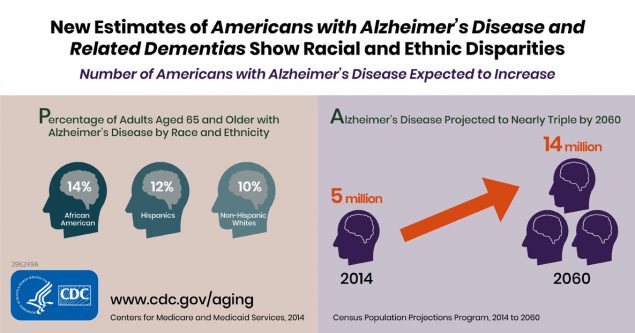 The U.S. burden of Alzheimer’s disease and related dementias (ADRD) will double by 2060, according to a new study from the Centers for Disease Control and Prevention.

“This study shows that as the U.S. population increases, the number of people affected by Alzheimer’s disease and related dementias will rise, especially among minority populations,” said CDC Director Robert R. Redfield, M.D. “Early diagnosis is key to helping people and their families cope with loss of memory, navigate the health care system, and plan for their care in the future.”

Alzheimer’s disease is the fifth most common cause of death for Americans ages 65 years and older. It is an irreversible, progressive brain disorder that slowly destroys memory and, eventually, a person’s ability to perform even the simplest tasks, such as bathing, feeding, and dressing.

CDC researchers estimated the number of people with Alzheimer’s by age, sex, race and ethnicity in 2014 and 2060 based on population projections from the U.S. Census Bureau and percentages of Medicare Fee-for-Service beneficiaries ages 65 years and older with Alzheimer’s disease and related dementias from the Centers for Medicare & Medicaid Services.

The report also addresses the need to provide support to caregivers of persons living with Alzheimer’s and related dementias because an early diagnosis can help caregivers plan for the life-changing experience of caring for a friend or family member with these conditions, which can also impact the caregiver’s health and well-being.

“It is important for people who think their daily lives are impacted by memory loss to discuss these concerns with a health care provider. An early assessment and diagnosis is key to planning for their health care needs, including long-term services and supports, as the disease progresses,” said Kevin Matthews, Ph.D., health geographer and lead author of the study with the CDC’s Division of Population Health within the National Center for Chronic Disease Prevention and Health Promotion.

CDC works to understand and improve the lives of people with Alzheimer’s and related dementias, and their families, by: