In 2016, nearly 45,000 Americans age 10 or older died by suicide. Suicide is the 10th leading cause of death and is one of just three leading causes that are on the rise. 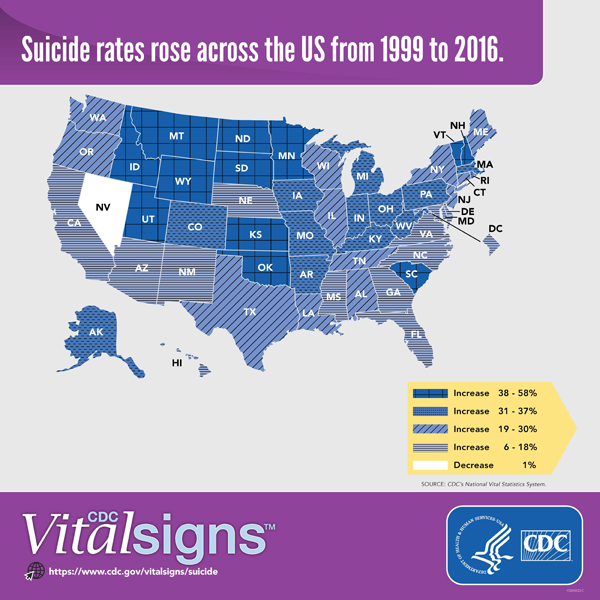 Suicide rates have been rising in nearly every state, according to the latest Vital Signs report by the Centers for Disease Control and Prevention (CDC). In 2016, nearly 45,000 Americans age 10 or older died by suicide. Suicide is the 10th leading cause of death and is one of just three leading causes that are on the rise.

Suicide is rarely caused by a single factor. Although suicide prevention efforts largely focus on identifying and providing treatment for people with mental health conditions, there are many additional opportunities for prevention.

“Suicide is a leading cause of death for Americans – and it’s a tragedy for families and communities across the country,” said CDC Principal Deputy Director Anne Schuchat, M.D. “From individuals and communities to employers and healthcare professionals, everyone can play a role in efforts to help save lives and reverse this troubling rise in suicide.”

Many factors contribute to suicide

For this Vital Signs report, CDC researchers examined state-level trends in suicide rates from 1999-2016. In addition, they used 2015 data from CDC’s National Violent Death Reporting System, which covered 27 states, to look at the circumstances of suicide among people with and without known mental health conditions.

Researchers found that more than half of people who died by suicide did not have a known diagnosed mental health condition at the time of death. Relationship problems or loss, substance misuse; physical health problems; and job, money, legal or housing stress often contributed to risk for suicide. Firearms were the most common method of suicide used by those with and without a known diagnosed mental health condition.

Across the study period, rates increased in nearly all states. Percentage increases in suicide rates ranged from just under 6 percent in Delaware to over 57 percent in North Dakota. Twenty-five states had suicide rate increases of more than 30 percent.

The report recommends that states take a comprehensive public health approach to suicide prevention and address the range of factors contributing to suicide. This requires coordination and cooperation from every sector of society: government, public health, healthcare, employers, education, media and community organizations.

To help states with this important work, in 2017 CDC released a technical package on suicide prevention that describes strategies and approaches based on the best available evidence. This can help inform states and communities as they make decisions about prevention activities and priorities.

Everyone can help prevent suicide:

The media can avoid increasing risk when reporting on suicide by:

Vital Signs is a CDC report that typically appears on the first Tuesday of the month as part of the CDC journal Morbidity and Mortality Weekly Report. The report provides the latest data and information on key health indicators, and what can be done to drive down these health threats.

Information from the Center for Disease Control and Prevention.