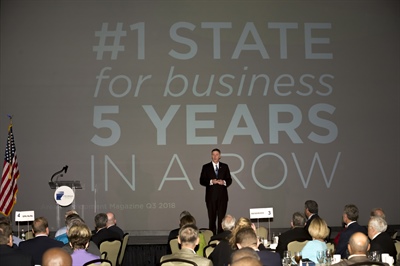 “The Port of Brunswick achieved a solid performance across all cargo categories over the last fiscal year,” Lynch said. “As GPA adds new terminal space, we will expand our service area in the Southeast and beyond.”

During the event hosted by the Brunswick Golden Isles Chamber of Commerce, Lynch outlined a series of infrastructure projects that will increase capacity and provide new opportunities in Roll-on/Roll-off cargo handling. Over the next 12 months, GPA will add 60 dockside acres to the Ro/Ro operation. The new space will increase car storage by 8,250 spaces. GPA also plans to add a new cross-terminal road linking the three vessel berths, as well as a new access road between the docks and the island’s south side. These improvements will offer a more direct route to existing auto processing lots and new development on the south end of the terminal.

“Our ability to expand capacity on Colonel’s Island is unmatched in the U.S.” said GPA Board Chairman Jimmy Allgood. “The strength of our ports is a result of the incredible team that makes it all possible – the GPA staff and International Longshoremen’s Association, the on-terminal auto processors, our thousands of loyal customers, and, of course, the support we receive from elected leadership throughout the state.”

The new dockside expansion will also double GPA’s rail capacity and give Brunswick the ability to build up 10,000-foot long unit trains on terminal. These longer trains make direct service over greater distances more attractive to Brunswick’s Class I rail roads, CSX and Norfolk Southern. This will allow the Port of Brunswick to expand service in markets west of the Mississippi River and into the American Midwest. Vehicles crossing the Brunswick docks are already moving west in significant numbers, with 16,000 units sent to California from Brunswick and more than 4,500 to Texas during FY2018.

By 2019, the GPA will have added 250 acres, for a total of 550 acres of leasable space for auto processing at Colonel’s Island Terminal. Current annual capacity in Brunswick is more than 800,000 units. GPA’s plan is to utilize an additional 400 acres to bring annual throughput capacity to 1.5 million vehicles in the coming years.

“By tonnage, Brunswick is already the second busiest Ro/Ro port in the nation, behind only Baltimore,” said Lynch.  “As business grows to fill our expanding terminal, the Port of Brunswick will play an even larger role on the global trade in vehicles and heavy equipment.”

In other news, forest products crossing the docks at Mayor’s Point Terminal in Brunswick increased by 34.5 percent in FY2018, up 35,953 tons, for a total of 138,653 tons.  Bulk cargo handled by terminal operator Logistec at East River Terminal totaled 1 million tons in the fiscal year ended in June, up 11 percent, or 101,000 tons. Of GPA’s total Roll-on/Roll-off trade, Brunswick moved more than 590,500 units, or 1.25 million tons and flat growth for the fiscal year.

Lynch also released new economic data from the University of Georgia’s Terry College of Business showing a 20 percent increase in Brunswick-area jobs supported by port activity. The Port of Brunswick now sustains 10,800 jobs across Glynn, Camden, Brantley, Wayne, Long and McIntosh counties. That is an increase of more than 1,800 jobs since 2014, according to the UGA economic impact study. Major industries across the six-county area include the manufacture of paper and forest products, agriculture, and auto processing. Statewide, port activity supports 440,000 jobs and $25 billion in annual income for Georgians.

“Our success translates into more jobs and greater prosperity for the communities surrounding our terminals, and for the state of Georgia as a whole,” Allgood told those gathered for the event. “As we make the preparations necessary to grow our cargo capacity at the Port of Brunswick, we anticipate economic opportunities will also expand.”