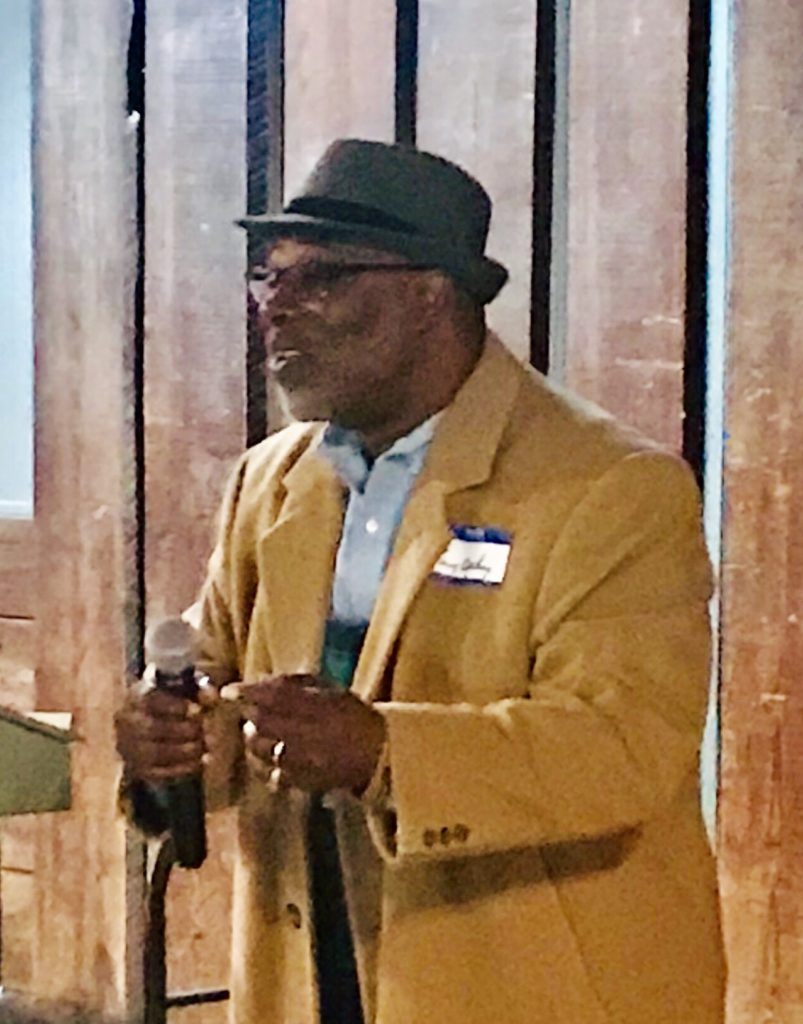 Famed Gospel singer Mahalia Jackson said, “Without a song, each day would be a century.”  Then the “Father of Black Gospel Music” Thomas A. Dorsey observed, “Every nation, every human being that came across earth had a song and sang in some way to their God.” Ms. Jackson and Mr. Dorsey would have been pleased with the winter meeting of the Chattooga County Historical Society at the Summerville Depot last Sunday.  The group commemorated Black History Month with a program focusing on our African American music heritage. Over 150 people were in attendance.

The emcee for the program was Linda Farmer Hawkins, who had assembled the day’s line-up.  Ms. Hawkins, longtime member of the AMF Quintet, began with comments about the power of music.  The program focused on African American music from 1865 (the time of Negro spirituals and “cornfield ditties”) to the present day.

Reba Welch (left) and Linda Hawkins (right) led the program. They are shown here with Jeneal Johnson (AKA Aretha Franklin) and Melvin Mosley.

Music is an outlet during times when we cannot do anything about our troubles.  It is also our most natural form of praise.  A wonderful singer, Ms. Hawkins led the group in a rousing rendition of “This Little Light of Mine,” before bringing Minister Melvin Mosley forward for the invocation.

Chattooga County has a rich musical heritage among its African American citizens—and many were represented in this gathering.  The program drew largely from familiar gospel tunes and the mood alternated between somber contemplation and soaring joy. The Chattooga/Floyd Mass Choir kicked off the performances with a medley of several favorite numbers including “Kum Ba Yah,”“Standing in the Need of Prayer” and “Everybody Talkin’ ‘Bout Heaven.”

Next up was the Foster Family, always a joy to hear, who paid tribute to the Fisk Jubilee Singers, an a cappella group comprised of students at Fisk University in Nashville, renowned from 1871 to today.  The Fosters’ medley included two of the most popular spirituals – “Swing Lo, Sweet Chariot” and “Down by the Riverside.”

Roland Hayes (1887-1977) was an American lyric tenor and composer.  Born on the plantation in Curryville (Gordon County, Georgia) where his mother had been born a slave, Hayes achieved international acclaim for his music.  Dr. LaToya Aker, also a resident of Curryville and a relative of Mr. Hayes, gave moving renditions of his “Little Boy, How Old Are You?”, “Were you There?” and “Plenty of Room.”

Dorsey and Jackson: The Father and the Queen of Gospel

Larry Anthony was on hand with his own tribute to Thomas A. Dorsey (1899-1993), known as the father of black gospel music.  Mr. Anthony sang what is considered Mr. Dorsey’s most famous composition, “Take My Hand, Precious Lord.”  The song was sung by contralto Mahalia Jackson (1911-1972) at the funeral of Dr. Martin Luther King, Jr.

Representing the Clara Ward Singers choir were Summerville’s own “Mosley 14.”  The group, comprised of the family of the late Hamp and Jessie Perry Mosley, sang the song “On the Last of the Year” and received a great ovation.

Lindra Finley, an accomplished singer herself, paid homage to the “Great Mahalia” with her rendition of “Soon I will be Done with the Trouble of the World.”  Ms. Jackson, known as the Queen of Gospel, was acclaimed the world over.

Deja Bankson, who has performed at numerous events and church services in our area, came forward with a lovely praise dance to the accompaniment of the old spiritual “Wade in the Water.”

Jeneal Farmer Johnson took the stage with her own tribute to “Queen of Soul” Aretha Franklin (1942-2018), one of the most recognizable voices of the last half-century.  Ms. Johnson chose perhaps the most recognizable gospel tune the world over and the title track from Aretha’s 1972 hit album, “Amazing Grace.” The crowd especially enjoyed this song, with one person observing, “You did Aretha proud.”

Sam Cooke (1931-1964), who came to be known as the King of Soul, was an American singer, songwriter, and civil rights activist. Portraying Sam Cooke was Brad Mosley (son of the late Ben and Aileen Mosley), who gave a powerful rendition of “Long Time Coming.”

The Male Chorus of the Oak Hill Missionary Baptist Church—remembered for last year’s portrayal of the “Five Blind Boys from Alabama” were in the house with their version of “I’m Calling Your Name Right Now” made famous by The Wardlaw Brothers of Lyons, Georgia.  The Chorus moved the program forward to the present day with their performance of “Started My Life Over Again” made famous by the Canton Spirituals.

Be a Part of the Historical Society

Ms. Hawkins came back to the podium to finish up the day’s celebration.  She and Historical Society program chair Reba Welchthanked all who attended this special celebration of Black History Month and invited everyone to enjoy refreshments.

Meetings of the Chattooga County Historical Society are free and open to the public. Membership is comprised of almost 300 families, both from inside and outside the county. Family memberships in the organization are $20.00 per year and include a quarterly publication—and all are welcome to join. Contact the Society at P.O. Box 626, Summerville or via email at chattoogahistory@outlook.com.